Help Izel in her search to reclaim the Monoliths and destroy every planet in her way.

The Shrike are the secondary antagonists of Season 6 of the TV series Marvel's Agents of S.H.I.E.L.D. They are a race of parasitic avian-like demons that serve their creator Izel and travel throughout the universe using their hosts as energy to destroy planets.

Over 100 years ago, the Shrike were created by the demonic entity known as Izel. Serving their creator, the Shrike go around different planets and possess the natives as hosts. Using the hosts' bodies as energy, the Shrike use the energy to expand like crystals and destroy planets. At some point, a vengeful Sarge and his crew started hunting them throughout the universe, where they kill the creatures with certain knives specifically designed to kill them.

Eventually, after recently destroying the homeworld of the Chronicoms, Chronyca-2, the Shrike were sent by Pachakutiq to Earth and began possessing humans. After Sarge's team arrived, they hunted anybody who was a Shrike. After they killed a Shrike, the host's body was brought in by S.H.I.E.L.D. for analysis. After opening up the host's body, the Shrike was revealed to be still alive and flew around the base before taking control of Agent Keller. Just as he being exploded into crystals, Yo-Yo Rodriguez killed the Shrike with the same knife, saving everyone in the base. Eventually, Sarge and Snowflake captured a Shrike-possessed human and had Melinda May kill it to confirm their existence.

In an attempt to save people possessed, S.H.I.E.L.D. captures two Shrike hosts and bring them onto the Zephyr. However, the two made each other explode and crystallize everything around them. Sarge helped them by using extreme cold because the crystals cannot survive in it. On board of a scavenger ship, Izel started creating more Shrike to take control of the crew members. The Shrike on Earth then converge at a landing point and form a crystallized tower for Izel's arrival. Thanks to Daisy, May, Deke and Snow, they use the truck to destroy the tower and are able to survive their attacks. Jaco then lures them onto Izel's ship and wipes them out with Sarge's bomb.

The Shrike then return when Izel begins fulfilling the rest of her plan to bring her kind into the real world. Sarge, May and Quake fight them off when heading to her temple and Quake is able to save Mack and Yo-Yo from them. After Sarge defects to Izel's side, the Shrike are sent to kill off the nearby S.H.I.E.L.D. agents and one manages to possess Yo-Yo. As Mack, Yo-Yo and Quake face off against Sarge, Deke holds them off in the temple. After May is able to kill Izel, the Shrike then die and are vomited out of their hosts just as Quake and Mack finally kill Sarge. 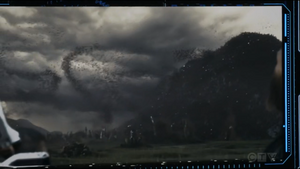 Footage of the Shrike destroying Chronyca-2. 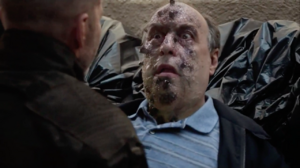 A man possessed by a shrike is killed by Sarge. 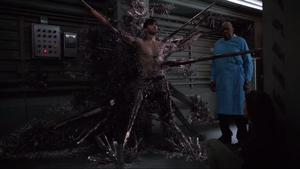 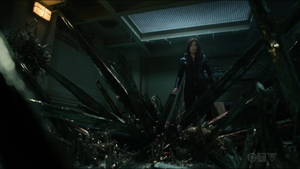 May after fighting and killing a Shrike-possessed man.