Eliminate all that oppose them.

The Shroobs (in Japanese: (ゲドンコ, Gedonko) are a villainous race of poison mushroom-like aliens from the video game Mario & Luigi: Partners in Time that attacked the Mushroom Kingdom when Mario and Luigi were babies. They are a purple mushroom-like species ruled by Princess Shroob and her older sister. They are from a Shroob-like planet and most Shroobs carry ray guns with them. Despite looking a bit similar to the much more benevolent Toads, Shroobs are more fungoid in appearance.

They first started their invasion by destroying Toad Town and capturing many Toads. These Toads were taken to Toadwood Forest, where their Vim was drained by the forest's genetically altered trees. The Vim was then collected at the Vim Factory, where Dr. Shroobs gave the Vim to Swiggler, a terrifying Wiggler-like creature. While also guarding a Cobalt Star shard, Swiggler drinks the Vim it is given and powers the Shroob UFOs.

Soon after, they unleashed a giant creature called a Yoob and it attacked Yoshi's Island. Yoob would eat any Yoshi it could find. These Yoshis would then be imprisoned inside eggs and eventually be converted into more monsters to be used during the Shroob's invasion of the Mushroom Kingdom. During the invasion, the second-in-command, Princess Shroob, disguised herself as Peach to take over the Mushroom Kingdom of the future and thus make sure her plan would succeed.

The Shroobs were apparently melted away when the brothers and Princess Peach discovered the Shroob's weakness (babies' tears).

A single Shroob makes a cameo in the game. In the Fawful Theater while searching for a seat, Bowser can encounter a Shroob in the lower right-hand corner seat. It says nothing if Bowser tries to interact with it.

A group of three Shroobs appears as a hidden optional boss in Bowser Castle. In the room where a code has to be inserted, Mario must hit square twice, circle once and triangle thrice, then the door. Beyond the door is a room full of frozen Shroobs and some will suddenly thaw and attack. Defeating the Shroobs is the only way to get Magic Window and the Shroob Boots. In battle, they have 500-1000 HP, and attack much like the Guardian Shroobs. When attacking solo though, they no longer send out a spark when targeting Mario, but will spin clockwise instead.

In the remake, the Shroobs reprise their role in the main game and serve as enemies in Bowser Jr.'s Journey. They are under the Ranged type and use their blasters as weapons, with a weakness to Swoops. They first appear in the Chilling Magma level of the Lava Lair where they thaw in the freezer while Bowser Jr., Kamek, and Morton search for Ever Ice. Several other Shroobs appear in later missions.

In this game, a picture of a lone Shroob can be seen in Kylie Koopa's office in Wakeport.

Though they make no actual appearance in the game, Shroob sprites from Mario & Luigi: Bowser's Inside Story can be found in the game's files.

Shroobs appear in volumes 35 to 37. Unlike in the games, they speak human languages.

A Shroob appears as a sticker that raises launch power to any fighter.

The Shroob language as it appears in the text bubbles in the game is just a bunch of nonsensical small picture text. Only one phrase, signaling attack, is repeated throughout the game. When the Shroobs talk in the game, they make gibberish sounds.

However, they do sometimes use the Latin alphabet, as seen in the battle against Shrooboid Brat. When the Shrooboid Brat was about to attack, the Shroob crowd raised up signs that said either "M" or "L", signifying who to attack.

The Elder Shroob Princess can also speak English. Later on, the language is shown to players using subtitles in parentheses. Whether or not this means that Mario and Luigi begin to understand the language or is just for purposes of clarification is unknown.

The most common Shroob, simply known as Shroob, are purple spotted mushrooms with large red eyes, round mouths, claw-like hands, and use powerful ray guns. Like the Toads and Koopas in the Mushroom World, the Shroobs co-exist with several sub-species.

A Shrooblet is a small, purple, Goomba-like Shroob with green spots, found near Hollijolli Village. They attack by spinning into Mario or Luigi; an attack that can be easily countered with a simple jump. If a Shrooblet lifts its right foot before attacking, it will twirl into Mario; if a Shrooblet lifts its left foot before attacking, it will spin into Luigi. Shrooblets are among the weakest creatures in the Shroob military, and due to their small size and color, they are apparently baby Shroobs.

Dr. Shroobs are yellow Shroobs that wear thick, swirly glasses. During the Shroob invasion of the Mushroom Kingdom, Dr. Shroobs were stationed in the Vim Factory, allowing them to monitor the factory's vim transformation process.

Shrooba Divers are green Shroobs with white spots that wear scuba masks and oxygen tanks. These Shroobs have the unique ability to "swim" in sand; their name is even a pun on "Shroob" and "scuba diver". Shrooba Divers were stationed in the Gritzy Desert during the Shroob conquest of the Mushroom Kingdom, where they would patrol the sands, looking for intruders who would spoil the invasion effort.

A Blazing Shroob is a red Shroob with yellow spots whose head is on fire. They worked inside Thwomp Caverns during the Shroob invasion of the Mushroom Kingdom.

An Intern Shroob is a smaller, light-colored Shroob that rides on the back of its elderly counterpart, a Shroobsworth. Intern Shroobs ride piggyback style, similar to how the Baby Mario Bros. hold on to their older counterparts. Intern Shroobs, along with Shroobsworths, were assigned to protect the halls of Shroob Castle, the Shroob's base of operations on Mushroom World. The two Shroobs would work together in combat to defeat intruders.

Shroids are gray Shroob robots with yellow spots and green photoreceptors; the name 'Shroid' is actually a portmanteau of the words 'Shroob' and 'droid'. These powerful robots were stationed in Toad Town during the Shroobs' occupation of the Mushroom Kingdom. Shroids patrolled the ruins of the damaged capital city, attacking any intruders. The four Mario Bros. of past and present encountered many Shroids during the heroes' attempt to assemble the Cobalt Star and liberate Toad Town.

A Shroobsworth is an elderly lighter-colored Shroob. Shroobsworths are designed to resemble Toadsworth, Princess Peach's longtime steward. As such, a Shroobsworth has a white mustache and a cane. These elderly Shroobs carry the younger Intern Shroobs on their backs, piggyback style (like Mario and Baby Mario or Luigi and Baby Luigi). Shroobsworths, along with their younger counterparts, were assigned to protect the halls of Shroob Castle, the Shroobified version of Princess Peach's Castle, during the Shroob occupation of the Mushroom Kingdom. As such, the four Mario Bros. of past and present battled many Shroobsworth's and Intern Shroobs during the heroes' efforts to rescue Peach, defeat Princess Shroob, and destroy the Shroob menace.

They possess very advanced technology, such as ray guns and a massive fleet of flying saucers, which are powered by Vim (basically a Toad's life force). The saucers are capable of shooting energy bolts that turn people into Shroob Mushrooms, as well as causing devastating damage to houses and buildings. The Shroob military is very complex in their processes. They come in different colors and have different attacks. Unlike the Koopa Troop, the Shroobs have everything laid out in advance so that they could both protect vital operations and invade enemy regions at the same time, suggesting they are very intelligent. 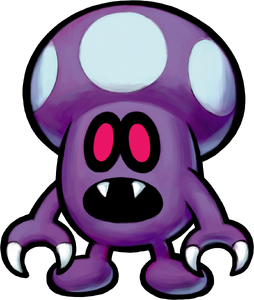 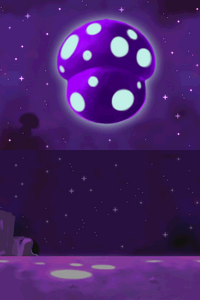 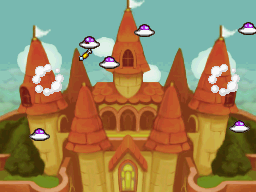 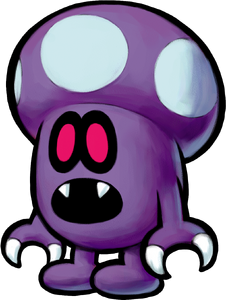 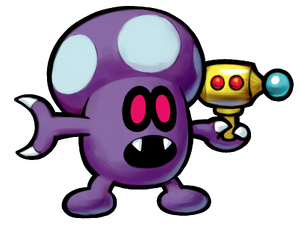 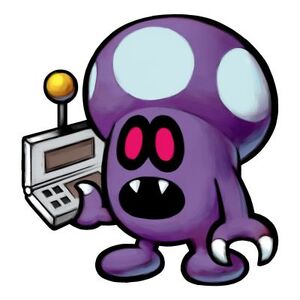 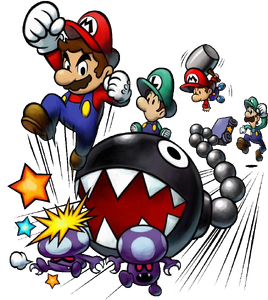