Fully take over Gaara as means to destroy all life (formerly).

Aid Naruto and his allies to save the world from Kaguya and Madara (succeeded).

Shukaku (also known as the One-Tail) is a character in the Naruto series. It is a Tanuki-like sand demon who is one of the nine Tailed Beasts. It used to be sealed inside Gaara in the beginning of the story.

He was voiced by Hiroshi Iwasaki in the Japanese version of the anime, and Kirk Thornton in the English dubbed version.

Shukaku is shown to be crazy, dangerous, and belligerent. During Gaara's battle against Naruto, Shukaku is shown to be homicidal and destructive, so he has no hesitation towards killing off its opponents. Like most tailed beasts, Shukaku despise humans for their treatment against them. According to Gyuki, Shukaku dislikes Kurama because of its way of determining a Tailed Beast's power by the number of tails it had (Shukaku having one and Kurama having Nine).

Despite Shukaku's hatred, it is shown to be loyal and respectful towards humans like the Sage of the Six Paths, Bunpuku, Gaara, and Naruto. It also believes that one day humans would be able to understand the Tailed Beasts.

Like all of the Tailed Beasts, Shukaku is an extremely powerful beast with immensely high chakra. It has the ability to manipulate sand like his Jinchūriki Gaara. As a resident of the Land of Wind, Shukaku also has the ability to manipulate wind from its mouth and turn it into a technique known as the Drilling Air Bullet. He also can possess Gaara when he's in a weakened state, or when he is asleep; Shukaku would use this to threaten to take control over Gaara should the latter go to sleep, thus forcing Gaara to become an insomniac. Shukaku is also capable of using Magnet release and powerful seals. It can even merge its Magnet release chakra with Naruto's rasengan to create a rasengan capable of sealing its target.

Shukaku was born towards the end of the Sage of the Six Paths, who used his power to take the Ten-Tails’ chakra from its body and divide it into the nine tailed beasts to ensure that when he was gone, it could not rampage. However, with its origins unknown to the public and believed to be a reincarnation of an evil spirit, Shukaku was captured by the Village Hidden in Sand.

Shukaku had few Jinchūriki, the first being the inspiration for the Third Kazekage's Iron Sand style. One of Shukaku's Jinchūriki was an old priest named, Bunpuku. Shukaku at first did not like Bunpuku for his ignorance. But came to admire the old priest for his beliefs that there would one day be a human who would understand the Tailed Beasts.

The next Jinchūriki was Gaara, the son of the Fourth Kazekage and his future successor to the Kazekage title. The day of his birth, seeing him to be the most compatible of his children, the Fourth Kazekage forced Chiyo to seal the tailed Beast inside Gaara while he was inside the womb of his mother, Kurura, who died during the premature birth. However, Gaara couldn't control Shukaku and it would often rampage, destroying everything in sight and causing thousands of death. The 4th Kazekage hired his brother-in-law Yashamaru to assassinate his son, which he failed but lied to him that his mother never loved him and that she was nothing more than a human sacrifice. Angered and enraged, Gaara released the full power of Shukaku and went on a rampage. His father eventually used the Gold Dust to subdue Shukaku's power.

During the invasion of Konoha, Shukaku manifests through Gaara accessing the Tailed Beast's power before completely transforming and allowing Shukaku to obtain total control. However, Naruto manages to force Gaara to wake up so Shukaku would be trapped within his Jinchūriki's mind again.

2.5 years later, having become the Fifth Kazekage, Gaara was captured by Deidara. He and Sasori took him to an Akatsuki lair where they and the other Akatsuki members spent three days extracting the One-Tail from his Jinchūriki and sealing it within the Demonic Statue of the Outer Path. Though Gaara was saved from death by Chiyo's sacrifice to redeem herself for the life he was forced into, Shukaku remained in the Akatsuki's possession until the Fourth Great Ninja War when it was used to recreate the Ten Tails.

After the defeat of the Ten Tails Jinchūriki Obito, Shukaku along with the other Tailed Beasts teamed up and decided to deal with the recently revived Madara. Shukaku along with his former Jinchūriki, Gaara, and the respective tailed beast battled Madara. However, in the midst of the battle, Madara summoned the Demonic Statue of the Outer Path and intend to snare all the beasts to revive the Ten Tails. Despite Gaara's best efforts, Shukaku along with the other Tailed Beast were resealed into the Statue. Shukaku is later seen when Obito manage to grab a piece of its chakra along with Gyuki's chakra from the new Ten Tails Jinchūriki, Madara and later seal it within Naruto. Shukaku was later seen along with all the tailed beasts and the Sage of the Six Paths within Naruto, as Naruto is about to get the Senjutsu chakra from the Sage of the Six Paths. With this Shukaku assists Naruto in his battle against Madara and later Kaguya. 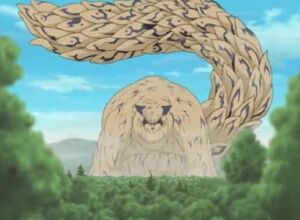 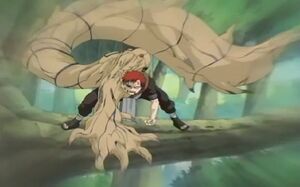 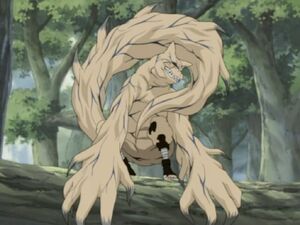 Shukaku in a mini-Shukaku form. 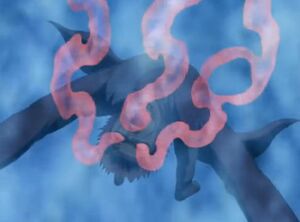 Shukaku being extracted by Gaara.