He is an infamous ghoul who goes by the name of Gourmet (美食家) and was a member of the Ghoul Restaurant until he betrayed the organization. He is obsessed with Ken Kaneki and wants to devour his flesh and taste his blood.

He was voiced by Mamoru Miyano (who is famous for his voice acting role as Light Yagami) in Japanese and J. Michael Tatum in English, who also voices Sebastian Michaelis in Black Butler. He was portrayed by Shota Matsuda in live action film.

Not much is known about Shuu's early life but what is known is that he was born into the Tsukiyama Family, a family of powerful and rich ghouls and inherited a large quantity of money. He became a student at Seinan Gakuin University studying Social Welfare at its Department of Human Sciences. He's killed many people in the past and is known for selectively choosing his prey.

Tsukiyama appears as the main antagonist for the Gourmet Arc. He's first seen dining on the eyes of Misono Karube after he stole and gauged them out. He then arrives at Anteiku and meets Ken Kaneki for the first time. He is quickly attracted to Kaneki after he heard rumors of his ability to encounter Ghoul Investigators and Kaneki's unique and enticing scent. Tsukiyama quickly makes an interest of hom but Touka is disgusted by his behavior and tells him to leave but Shuu reminds Kaneki that he'll see him again. Shuu and Kaneki run into each other again after he enrolled himself at Kamii University and talks with Kaneki and tells a little more about himself and invites Kaneki to coffee and Kaneki accepts the offer despite being hesitant at first.

At the shop, he talks to Kaneki about gourmet and gives him a book on French Gourmet dishes and Kaneki gets a paper cut on one of his fingers and it starts to bleed (in the anime it's from a shard of a broken coffee cup). Tsukiyama cleans it up with a napkin and then goes into the bathroom to sniff it and gets obsessed and entangled into the scent of Kaneki's blood and keeps the rag in a paper bag. After the incident, Kaneki is then invited to dinner with Shuu at a restaraunt and Kaneki showers and gets ready. This is all a trap though, as in reality, Shuu is offering Kaneki as entertainment for the Ghoul Restaraunt and watches as Kaneki runs away from Taro-chan but after Kaneki reveals his true identity as a One-Eyed Ghoul, Tsukiyama interrupts the brawl and kills Taro and offers him as tonights meal instead. He then plans on meeting Kaneki next time and having him all to himself as his own personal meal. Later on, Tsukiyama finds Kimi Nishino, chloroforms, and kidnaps her. Nishiki, Kimi's boyfriend, tells Kaneki the bad news and Kaneki, Nishi, and Touka all head down to the meeting place which is a small local community church where Tsukiyama has set up his dream meal for him and Kaneki. Kaneki and Touka fight him but Shuu is just too powerful and Kaneki offers himself to Touka and gives her strength and is able to beat Shuu and leaves him to tend to his injuries.

After Kaneki was abducted by Yakumo Oomori, Tsukiyama is invited over to Anteiku and it is revealed that he is still alive and fully recovered. He resulted to eating himself and claimed that he was "delicious" and was able to recover. It's revealed that Yoshimura had invited him since he is a strong fighter and joins Anteiku as the try to rescue Kaneki from the clutches of the Aogiri Tree. Tsukiyama is later on joined by Uta and Yomo as they confront and fight Noro. Tsukiyama is able to pierce Noro and Yomo kicks off his head but then Noro heals it back up. Tsukiyama leaves along with Uta and Yomo as Kaneki has broken out and escaped all by himself and after the 11th Ward hideout gets destroyed, Kaneki forms his own group of ghouls and Tsukiyama joins as one of the members.

Search for Kanou and Dissolution of the Ghoul Restaraunt

Post-Aogiri, Kaneki and his group are seen on the hunt for the infamous Doctor Akihiro Kanou and search for him in his laboratory. Tsukiyama then reveals that he got information from Madam A of the Ghoul Restaurant and reveals that the Restaurant has connections to Kanou as they were given experimented humans as scrappers from Kanou. They search for the doctor at his hospital and search for the nurse only to find that Aogiri got there first. Once the group arrives at Kanou's Lab however, Matasaka Kamishiro and Naki both show up and begin to engage the trio in a fight. Sachi fights Kaneki and Tsukiyama becomes his sparing partner in the fight against the buff Aogiri Member. Tsukiyama then fought Naki but then the CCG came in and Tsukiyama was forced to retreat by the actions of Banjou.

Shuu was shocked when Kaneki revealed his intention on returning back to Anteiku and claimed that his actions are "suicidal" but Kaneki went anyways. Once there however, the restaurant was uncovered to be a secret ghoul organization and the CCG attacked the restaurant. Kaneki and Nishi sit by as the fighting happens when Tsukiyama appears and attacks Kaneki in an attempt to eat and devour him but then fails. He's then left alone as Kaneki fights Arima, losses, and becomes the Ghoul Investigator, Haise Sasaki effectively removing all memories of Kaneki.

Three years later and Tsukiyama is a wreck. Depressed over the disappearance of Kaneki, Tsukiyama has fallen into a state of deep depression. He is looked after by a family employee, Kanae von Rosewald. Shuu is still obsessing over Kaneki and still can't get over it and was most likely scarred from the Anteiku Raid. Shuu is left in his dark room and is being taken care of by Karren von Rosewald, an employee of the Tsukiyama Family and he's constantly worried and concerned over Shuu's terrible conditions. Kanae then brings up a large suitcase for Shuu and he brings it to his apartment where he is currently locked away in. Due to Shuu's terrible condition, Chie has claimed that Shuu, her role model, is becoming rather boring and brings him a pari of Sasaki's boxers that says "ENERGY" on them in hopes that it chears him up.

As Shuu continues to lie in his pathetic state, Kanae enters into his room and gives him the gift. Shuu smells the boxers but gives it back. Shuu states that he can't smell them because his sense of smell doesn't work but compliments the design and says that he does sense a form of nostalgia from it. Kanae gives it back to Chie and she goes away after Kanae threatens to kill her but she knows that he'll never go through with it. Kanae then gathers "gourmet ingredients" for his master when he begins thinking about Haise Sasaki. Kanae then thinks that if Sasaki truly is Kaneki, then he'll kill him so Shuu doesn't find out and try to escape so he could devour him.

Tsukiyama appears briefly in his room where he is complaining that he is hot and hungry so Kanae goes to try to solve it. His kagune has began to consume his whole body as it spreads all over him as a result of his depression and his room is filled with bones and is also dark. Shuu has also been binge eating and has been devouring both humans and ghouls in order to feed himself and his family is worried sick. Since the Tsukiyama Family is a complete mess genetically as a result of marriages form different families and different ghoul genes, Shuu's kagune has been negatively affected and he is beginning to lose control over it and both Kanae and his father are worrying as a result.

One day, however, when wine is being brought to Shuu, he gets up and springs completely out of control and begins attacking everyone is sight. He begins fighting both his servants and Kanae whom he injures until his servants subdue him and he's knocked out. When he wakes up in his room where his servants are also at, he states that he doesn't remember what happens and apologizes after he is informed about the incident. He then asks Kanae to take care of his family and caresses his face. Karren then tells Shuu later on that Kaneki is still alive and hands him a photo of Haise Sasaki (i.e. Kaneki) to Shuu but he tears it up in rage and demands an explanation.and after he gets one, Shuu immediately gets up and starts running out the mansion (despite his poor health and constantly falling down) and tries to find Kaneki at the CCG Main Office while Karren accompanies him on a wheelchair. Shuu makes it to the main office where he sees Sasaki/kaneki leaving and rushes after him only to fall down and be picked up again by the Quinx Squad (with the exception of Kuki Urie). Sasaki apoligizes and leaves with his squad but they're still concerned for Shuu's well-being.

Tsukiyama dresses in traditional European attire with a very distinct sense of style. His original clothing consists of pruple shirt and dark blue pants with a red shirt underneath his jacket. He has black shoes and dark blue hair. He has a flamboyant and loud attire to match his personality quite well and his mask is a cresent moon with a mouth decoration on the left side to mach his Gourmet identity.

Tsukiyama is a sohpisticated, intelligent, and well-read gentlemen. He has a spoiled and narcissitic nature and is always loud and flamboyant when meeting with other characters. He has a deep obsession with Kaneki and does whatever it takes to taste his flesh and gets more obsessed after he hears that Kaneki had commited canibalism and has a kakuja. In Tokyo Ghoul:re, however, his personality dramatically changes. He's now sad and depressed as Kaneki is gone and Sasaki replaces him. He continues to obsess over him and stays indors and isolated fromt he rest of the outside world constantly. He is also in intense emotional issues as he is essentially emotionally broken.

Like every ghoul, Tsukiyama can be killed by other ghouls or by CCG's weapons like Quinques and Q-Bullets. Tsukiyama is also forbidden from eating any human food as it'll damage his health and severely weaken him. His depression seems to be taking a heavy toll however as he is now acting more like a barbarian as his kagune is consuming his body and is going out of control. 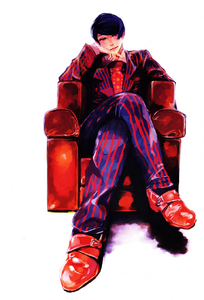 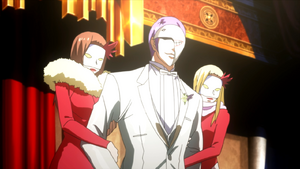 Tsukiyama at the Ghoul Restaurant as MM. 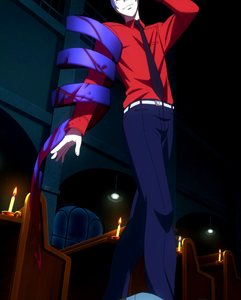 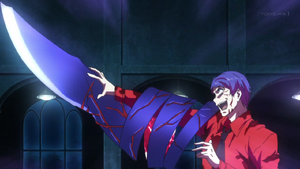 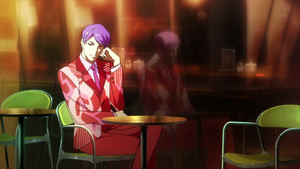 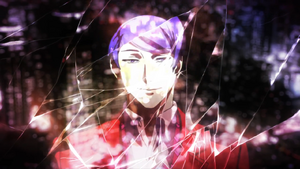 Tsukiyama in the Unravel Opening. 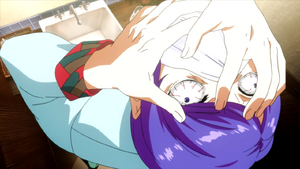 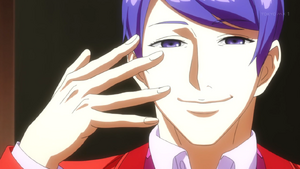 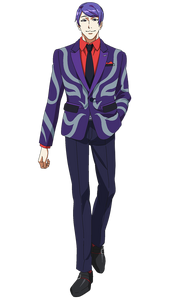 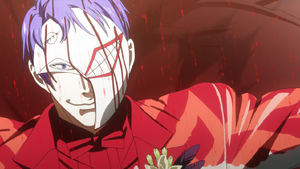 Shuu's Mask in the Anime Depiction. 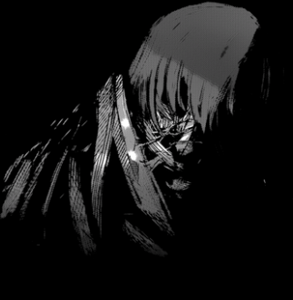 Shuu's depressed condition after believing Kaneki to have died. 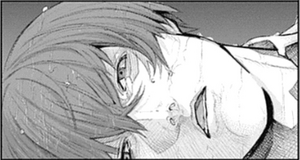 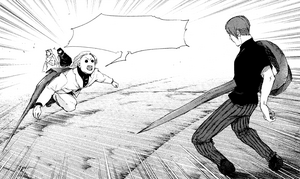 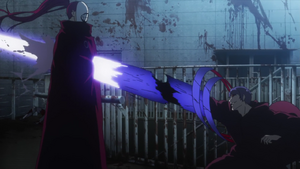 Shuu Tsukiyama in the katharsis opening