Varies depending on members

Wearing masks because they are too shy.

The Shy Guys are a group of creatures who are followers of Bowser and even other villains like Wart and King Boo. They always wear masks that cover their faces. They differ in color and variety. They also made a minor appearance in a Legend of Zelda game also as enemies. They are friendly to Mario and company in Mario Super Sluggers.

Shy Guys make their first appearance here as minions of Wart and the 8 Bit Club. The player can easily defeat them by picking them up and throwing them.

Shy Guys have appeared in every Yoshi game as common enemies.

Shy Guys appear in the Mario Party series through minigames, such as the popular minigame "Shy Guy Says", where a Shy Guy will shoot the player's balloon if their flag does not match the Shy Guy's. A Shy Guy makes a playable appearance in Super Mario Party.

A Shy Guy only appears as an unlockable costume when a Mystery Mushroom is used in the Super Mario Bros. style.

Shy Guys serve as the primary antagonists of Chapter 4, where they overrun Toad Town and cause havoc from their Toy Box. After General Guy is defeated, the Shy Guys run away. Spear Guys can be found on Lavalava Island.

Shy Guys appear in the audience. One may jump on stage and run to the backstage, causing a piece of the set to fall on Mario, the ally, or the enemies.

Unused sprites exist in the game's coding, implying Shy Guys were going to appear as NPCs or enemies. In game, they only appear when a stylish move is used.

Shy Guys appear in World 3 and World 4. Their only attack is to run at Mario.

Slurp Guys are Shy Guys with straws, and will suck up Mario's color if he is defeated in battle.

Fly Guys appear on the Yoshi's Story stage and fly across the stage. They sometimes may be holding food, and will drop them if attacked. They are referred to as Shy Guys through an obtainable trophy.

Shy Guy drivers serving as hazards on the Mario Circuit stage, where their karts will deal damage if they collide with a fighter. They can be hit with attacks or items, spinning out of control. Shy Guys also appear as a trophy and sticker, the latter slightly increasing leg attacks for all fighters.

Super Smash Bros. for Nintendo 3DS and Wii U

Shy Guys return as reckless drivers on the Figure-8 Circuit and Mario Circuit stages. Their behavior has not changed from previous games. A Shy Guy Mask can be a headgear for Mii Fighters. A Shy Guy also appears as a primary neutral spirit with their ability increasing fist attacks. Its spirit battle is against a Mii Brawler, Mii Gunner, and Mii Swordfighter all wearing Shy Guy masks on the Battlefield version of Mushroom Kingdom II. They favor neutral specials and are distracted by items. In the spirit battle against Roger the Potted Ghost, two green Shy Guys are represented by two Meta Knights.

Chuck Guys appear in Chucklehuck Woods. When battling a Gunner Guy in Bowser's Castle, a Shy Guy in army camo helps it move.

Normal and Paper Shy Guys appear as enemies in Mount Brrr. In Neo Bowser Castle, a Shy Guy can be encountered holding two Chain Chomps, one of which may be paper. Defeating the Shy Guy makes the Chain Chomps flee and end the battle.

Shy Guys appear in random places of the world, such as Rose Way. A stronger variant called Sling Shys are found in Nimbus Land as servants for Valentina. Even stronger Shy Rangers can be found in the depths of Pipe Vault. Special Shy Guys riding pogo sticks called Shysters serve as minions for Mack.

Shy Guys appear in the audience.

In 9-Volt's microgame "Yoshi", two Shy Guys appear to the side.

Shy Guys appear as enemies, and will charge at Captain Toad or Toadette if they spot them.

Under the name Mask-Mimic, Shy Guys can be found in the Bottle Grotto and Face Shrine. They can't damage Link, but will mirror his direction. Their masks are resistant to the sword, but can be defeated by throwing something behind him to attack their weak back side.

In the Super Mario Mash-Up Pack, a Shy Guy is a playable skin. Endermen will be replaced by Stilt Guys and Ender Pearls/Eyes of Ender are texturized to resemble Shy Guy masks.

Shy Guys do not appear in the game, but some masks can be found on shelves in Spooky Trails.

Shy Guys are exactly what their names describe them as they are shy which is why they hide their faces behind masks and hide under red robes. Despite being to shy to show their face or appearance they aren't to shy to show off their skills when it came out sports, kart racing and other events it is mentioned when it comes to sports or other events they like to show off their skills.

Because of their shy nature Shy Guys weren't very common to see and kept hidden out of site however it is mentioned after their first appearance that many different versions of Shy Guys came out of the woodworks. Aside from sports and kart racing in the Shy Guys pride themselves in their skills showing what they can not only do in sports but combat. Despite the pride in their skills it's mentioned like the Goombas and other minions the Shy Guys aren't very strong.

These are the regulars of the Shy Guys. Therefore they cannot do anything.

These are Shy Guys but with stilts.

These are Shy Guys but with the ability to fly using propellers on their heads.

These are Shy Guys gone tribal. They are just like Spear Guys in this matter but what seperates them apart is that these guys actually chuck the spears they are holding.

These appear to be normal Shy Guys. That is until they're approached. They then attempt to light themselves on fire and charge towards Mario.

These are Shy Guys simply set on fire.

These are Shy Guys stacked upon each other and surprising as it is this is in fact a variety of Shy Guys.

These are Shy Guys with a bullet blaster attached to their heads. They are red in color.

These are like Chuck Guys except they do NOT throw their spears.

These are the more elite version of a Boom Guy. These are blue.

These are basically fat Shy Guys.

These are a more elite version of a Boo Guy. These are black.

These are basically Shy Guys but in an opposite gender kind of way.

These are Shy Guys who love to boogie. They tend to look like jesters.

These are Shy Guys with medical experience. They appear in little flying vehicles that look like Bowser's Koopa Clown Car.

These Shy Guys are like their names, Shy Guy spies.

These Shy Guys are invincible and push torches to barbeque someone(hence their name).

These Shy Guys normally carry a parasol with which they use to float on the wind.

Ghostly Shy Guys wearing hooded robes and wielding scythes similar to that of the Grim Reaper.

These are black Shy Guys with jetpacks.

These are like Spear Guys except they do not have feathers or a shield.

These Shy Guys like to play Limbo a lot as they'll use their sticks they carry to trip anyone who comes nearby.

These are red Shy Guys who can be seen swinging a spiky mace around.

These are Shy Guys that are taller and thinner than a regular Shy Guy that when stomped on are not defeated but instead spit out watermelon seeds in the direction they were facing when they were stomped on.

Even though these are toys they are like a Dry Bones in that when stomped on they are not defeated but instead fall apart and in a few moments later reassemble themselves.

These are toys too but are invisible until one of the Mini-Marios steps on a switch the same color as them then they turn into a block.

These Shy Guys used to be invincible until Yoshi's Island DS. They're basically Shy Guys dressed as pirates.

These are Shy Guys with flowers on their heads. In this way they sort of resemble Spy Guys.

These are yellow Shy Guys that are attached to rockets and are invincible too.

This is a camo Shy Guy that is quick to run away.

This is a personal subdivision of General Guy's army consisting of at least 15 red Shy Guys.

These are Shy Guys who can flip in the air.

These are Shy Guys that are invincible and ride in a one-man submarine.

These are Shy Guys with insect-like wings attached to them and who wield tridents.

This is simply a red Shy Guy who is holding a chandelier who is seen in the Super Mario RPG: Legend of the Seven Stars game.

These are simply Shy Guys with black robes on. There is a single good Shy Guy that is white in color called White Shy Guy not that that has to do with anything...

These are toy Shy Guys that appear in the Mario vs. D.K. games.

A Mock Up is essentially a Fly Guy inside a 1-UP balloon. If these are not eaten by Yoshi quick enough the balloons will pop and the Fly Guys will fly away mockingly.

This is a robotic Shy Guy basically.

These are red Shy Guys that look suspiciously like a Beezo.

These are red Shy Guys on sword-tipped pogo sticks.

These are light green Shy Guys that work for Valentina. They are capable of using transformation magic.

A giant robotic Stilt Guy that appears as the fourth world boss for Yoshi's Island DS. He must be pushed in the lava by Yoshi before being ground pounded three times to defeat.

A green Shy Guy and member of the Elite Trio. He carries a silver pipe and a Magikoopa wand on his back. 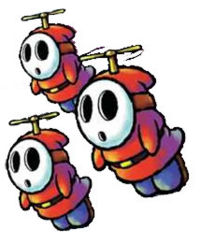 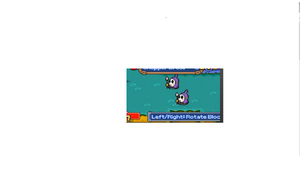 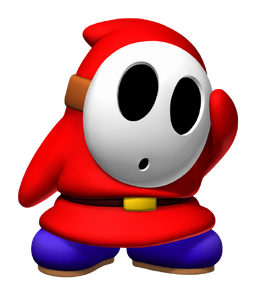 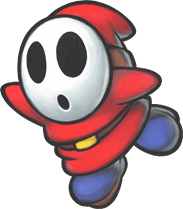 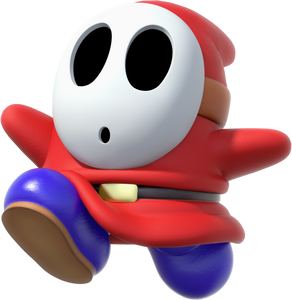 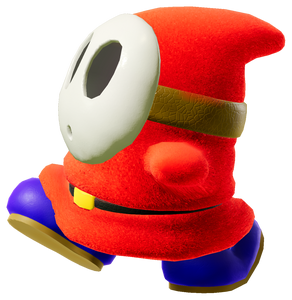