Inmate at the Arkham Asylum

To assist Fish in her plans (failed).

Sid is a minor villain at the beginning of the third season of Gotham. Having previously been an inmate at Arkham Asylum and a test subject for Professor Hugo Strange's experiments, Sid joined Fish Mooney after escaping into Gotham.

He was portrayed by Michael Lorz.

Sid is among the experiments freed when Mooney escapes from the Indian Hill facility. It is revealed, that the experiments made him extremely fast. Together with Nancy, another experiment, Sid captures Ethel Peabody and brings her before Fish in an abandoned warehouse.

Sid, along with the rest of the group, is present at an old bank when the GCPD arrives to arrest them. He escapes with Fish when the fight begins. Together with Nancy, Sid then kidnaps Harvey Bullock and brings him to Fish. From Bullock, Fish learns where Strange is being held and with Sid, Marv und Nancy, she heads to the place. Once arriving at the facility, a mansion outside of Gotham, Bullock is forced to distract the government agents guarding the door but Sid then turns up, knocks them down and shoots them in the head. He also disposes of the guards inside in a similar manner.

The group is prevented from fleeing with Strange when the police arrives outside. As Fish still has Bullock, they can hold the police at bay, but not the angry mob turning up with Oswald Cobblepot, who demands the death of Fish and her monsters. While looking for a solution, Sid and Nancy catch Jim Gordon when he enters the mansion to free Bullock.

When Fish decides to escape, she leaves Sid and Nancy behind to cover their backs. Sid and Nancy wait in the entry hall of the mansion, shooting the hostile citizens with their guns. However, they are eventually overwhelmed by the angry mob and are brutally killed by the mob. His and Nancy's corpse are later burned by the mob, who cheer because they managed to murder two of Fish's monsters. 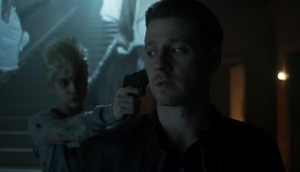 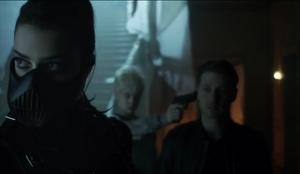 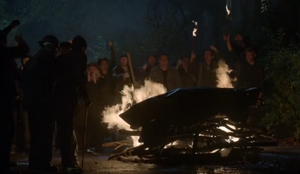 Nancy and Sid are burned by the mob. 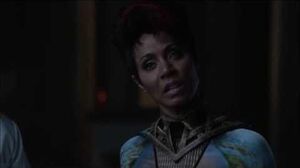 Gotham 3X02 Because Your Mine
Sid's death