One of Slappy Squirrel's enemies

He occasionally teams up with Walter Wolf and Beanie the Bison to defeat Slappy Squirrel.

Just like Daffy Duck and Sylvester from Looney Tunes, Sid talks with a lisp.

He is voiced by the late comedian Jack Burns.

He was mentioned in Slappy Goes Walnuts as he was imitated by Slappy Squirrel.

He, along with Walter and Beanie, had a non-speaking appearance in the last episode of Animaniacs. This episode was the only time that Sid did not speak. This was also the last time that Walter, Sid and Beanie appeared in Animaniacs, making them one of the few characters to not appear in the Animaniacs movie, Wakko's Wish.

Just like Walter and Beanie, Sid gets blown up, but he survives from the explosions that happen.

Sid is a purple squid with black eyes and a small pair of glasses.

Unlike Walter and Beanie, Sid does not wear clothes, shoes or accessories like hats except for the episode, Rest in Pieces where he was at Walter's funeral when Walter faked his death.

Sid is loyal, grouchy and evil, and enjoys helping Walter Wolf with his evil plans to cause explosions to defeat Slappy Squirrel.

Just like Walter, Sid can also get annoyed with Beanie acting dimwitted and not listening. He even abused Beanie by slapping him in the face one time. 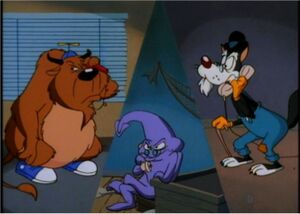 Walter, Sid and Beanie talking on their phones.