NOTE: This article is about the incarnation of Sideways from the Transformers live-action film series. The mainstream version can be found here: Sideways (Unicron Trilogy).

Sideways is a simple courier who avoided combat at all costs. He tried to always remain in the shadow of larger Decepticons, where the Autobots might not notice him. On Earth, he's keeping much the same practice. He teamed up with Demolishor early on, and hopes that if the Autobots find them, the big Decepticon can keep him safe.

In Reversal of Fortune, Sideways made an landing in Australia, with Optimus Prime and Arcee pursuing him through its northern territories. With his sports car alt mode, Sideways had them outclassed on the roads and was able to both outpace the Autobots and batter them about. Eventually, Optimus decided to change the terrain by blasting the Decepticon off the road. While willing to fight, the Decepticon gave up when human reinforcements arrived.

As it turned out, Sideways had deliberately let himself get captured as part of a plan to frame Skids and Mudflap: as soon as he was taken to Diego Garcia, Scorponok arrived to free him. Knocking Arcee aside and using debris as a weapon against humans, Sideways escaped.

In Turnabout, however, the other part of Soundwave's plan was to recruit Skids and Mudflap into the Decepticons, and Sideways was left frustrated in trying to cope with them. When the twins were sent to bring in Ransack, he protested that they were halfwits, and was relieved to find out they were just bait and he could get to kill them afterwards.

Trailing the twins with Grindor, he discovered to his disgust that the twins had talked to Ransack instead of fighting. Deciding to get rid of them, he and Grindor attacked them. However, the twins were only pretending to defect so they could capture a Decepticon; Mudflap engaged Sideways in a game of chicken, forcing the 'con off the road and straight into a tree.

NEST and the Autobots pursue Sideways and Demolishor through Shanghai. While Optimus and Ironhide are busy dealing with Demolishor, Sideways figures that he can escape now that they are sidetracked. But Arcee, Skids, Mudflap, and Sideswipe realize that he's going to get out of the toxic spill cover zone and they go after him. Sideways manages to evade all of them except Sideswipe, who leaps above him and slices him in half.

Sideways appears early in the Universal Studios theme park attraction, Transformers: The Ride. After Bumblebee grips Ravage who stole the AllSpark shard and ripped Ravage apart, EVAC was able to grab the shard with his hand, but then Sideways grabbed EVAC's hand with his left hand for the shard. Bumblebee then punched Sideways' left arm off, and proceeded to pound Sideways to death, allowing EVAC (carrying the passengers) to the remainder of the ride. 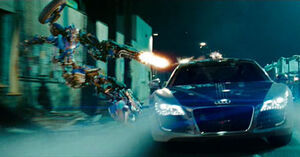 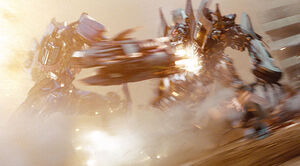 Sideways in Dark of the Moon 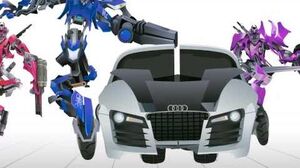