Eat the Penitent One (failed).

Sierpes is a supporting antagonist in the indie game Blasphemous, introduced in the Wounds of Eventide DLC. It guards the Severed Left Eye of the Traitor.

When the Fourth Visage turned against the High Wills, they imprisoned him within the Knot of Three Words and tore out his eyes. His left eye fell into the waters of Cvstodia, where it came into contact with a serpent. Growing into a monstrous sea creature, Sierpes attacked and destroyed all ships it came across.

Under the Fourth Visage's requests, the Penitent One is requested to reclaim his eyes from Sierpes and Isidora. Sierpes can be found in the Mourning and Havoc, a wasteyard littered with shipwrecks. As the Penitent One maneuvers through the area, blue lightning bolts attempt to strike him. Eventually, the Penitent One reaches a room with a large tower in the back made of ships with something coiled around it. Suddenly, from under the Penitent One's feet does a white scaly surface upholds and Sierpes reveals itself.

Due to its scales being too durable, the Penitent One can only damage Sierpes by slicing at its tongue. It opens its mouth whenever it attacks. Sierpes will attack by lunging at the Penitent One, telegraphed by emitting a loud roar before trying to bite him. It lets out its tongue as it slithers back to the side of the screen. It can also uproot its own bones from its body, and will try to stab the Penitent One which he can jump over. When it shows its tail, it will attack the Penitent One with electricity, either by shooting electricity at him or by releasing multiple homing orbs. Sierpes can also release several stationary orbs whenever it roars, which will flash chains between each other.

As the battle progresses when it reaches a third of its health, Sierpes will shift its body upwards and becomes more aggressive. Its attacks become more dangerous, such as summoning more orbs than before. When it uproots its spine, it may release a giant spike of bone that the Penitent One must slide under to avoid. It reaches the third phase once it reaches the last third of its health where it summons even more orbs.

Once it loses all of its health, Sierpes' tongue erupts. But in a final attempt to take out the Penitent One with it, lunges at him, managing to get him in its mouth. But the Penitent One manages to burst his way out of Sierpes and avoid digestion by slicing through its internals before bursting through the left eye, claiming the Severed Left Eye of the Traitor.

Sierpes is a massive monster resembling a white serpent with a pair of horns on its head. Its right eye is blue while its left eye is gold and pupiless, the Severed Left Eye of the Traitor. Behind its head is a tied golden platelet. A spear can be seen embedded in the right side of its head. Its tail ends with a bunch of spikes. In replacement to a tongue is a mound of flesh with two humanoid heads protruding from the top, with a smaller head pointing out to the right. The heads and open holes through the mound glow blue when Sierpes conducts electricity from its tail. 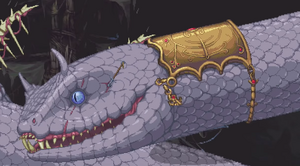 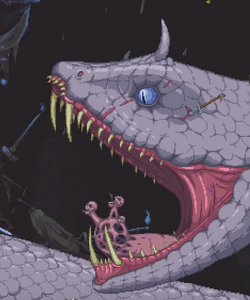 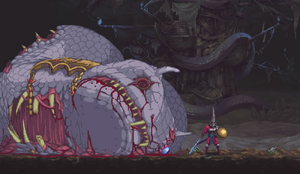 Sierpes' corpse after being defeated in battle. 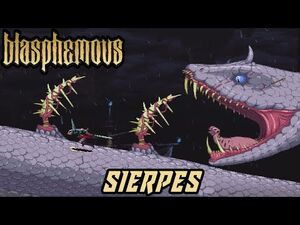 Blasphemous- Wounds of Eventide - Sierpes -No Damage - NG+ - Sword Only- 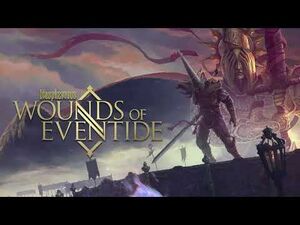