Shape-Shifting via a device (later disguises)

Shape-Shifting Henchman
Sigi Schlitzohr was one of the most recurring villains in the Austrian TV-show "Die heiße Spur", and also made several appearances after the show has been renamed into "Tom Turbo". He's been played by various actors over the years, most notably Dennis Kozeluh, the second actor to play the role who also played him for the longest time, from his about third appearance to the rest of Die heiße Spur and a long time during the early episodes in Tom Turbo.

Sigi first appeared in the show as a client of Rudi Rat, buying a watch-like device called XX that can turn him into the doppelgänger of any person he scanned with it. Sigi Schlitzohr turns into the doppelgänger of an officer in the power plant to overcome the alarm systems of the office, hacking the computer to make the electricity go crazy deactivate all security. When the real officer sees him, Sigi renders him unconscious with sleeping gas and heads to the banks. Tom arrives at the building as is able to restore the electricity. Meanwhile, Sigi is shocked when suddenly, the alarm starts working again. He gets trapped as the automatic door of the bank closes and is then picked up by the police.

Sigi Schlitzohr returned in a later episode, trying to enter a secret mine where Fritz Fantom was already mining gold. Sigi uses sleeping gas on him to knock him out and takes the gold for himself. However he too gets defeated by Tom.

After this, he shown to work for others, mostly Fritz Fantom. In one episode, for example, he turns into the aunt of Toms boss, Thomas, to pretend that she's a friend of Don Dynamit.

In another episode, he disguises himself as the ghost of a Scotsman to scare a film crew away from a castle so Fritz Fantom can look for the loot of bank robber. After Fritz Fantom betrayed him by giving him a jetpack intead of a bag of money, Sigi attacks Fritz when he's about to leave with a bag which he believes to contain the gold. While fighting, the two criminals cause the bag to rip, handles falling on their feet. Tom later revealed that the bank robber sold the gold and hid the money in the garbage bags Fritz Fantom found earlier.

Another time, Sigi Schlitzohr turns into the doppelgänger of the Lion Man, a circus attraction. In this disguise, he is after a dangerous device that can use lightnings to create an energy blast, which both he and Fritz Fantom and Sigi want to use to break into a highly secured bank. He and Fritz Fantom, who already stole the device, later look for the pets of the scientist who created the device as their cage contains the activation code. They both get trapped in a cage by Tom, but Fritz Fantom is able to escape and betrays the Lion Man by leaving him caged. Later, when Fritz Fantom is about to activate the device, the Lion Man enters Thomas' office after taking the form of the professor first to be let in. He threatens Thomas and tells Tom to stop Fritz Fantom. After he did so, the Lion Man demands that Tom starts the device, which Thomas tries to prevent as it could blow up half of the city. Noticing the XX, Thomas realizes he's dealing with Sigi Schlitzohr and takes the XX, turning him back into himself. Sigi just leaves the office while Thomas stops Tom from typing the last number.

When the show was renamed into Tom Turbo, Sigi Schlitzohr made several appearances, using his abilities for other villains, mostly Fritz Fantom.

He, together with Dr. Gruselglatz and Rudi Rat, joins Fritz Fantom to kidnap Thomas so they can force Tom Turbo to rob a cash transport for them. However, when breaking into the office, they quickly realize that Thomas moved away. After hearing that Tomas lives in an underground office in the zoo now, Sigi and Rudi Rat follow Tom there. After Tom left, Sigi trciks Thomas into opening the door by posing as a postman who has a package for him. However, Thomas sees him changing back into Sigi and traps him by putting an open chest at the end of the slide leading to his office. This doesn't stop Rudi from entering as well, though. Rudi immobilizes Thomas with an energy blast and releases Sigi. It's unknown what happened to them after this, as only Fritz Fantom was present when Tom was send to the robbery.

On another occasion, he was ordered by Dr. Gruselglatz to dress as Dracula and go to the library, as Dracula's secret book is hidden there and can only appear if "the lord of darkness arrives in his favourite form". However, Tom and Thomas realize that this line was about bats, not Dracula's human form. Tom uses a trick to talk in animal voices to invite bats to the library. After seeing the book, both Sigi and a kid detective on Tom's side rush to it, with Sigi turning into a runner to be faster. After Tom and his friends got the book, they run away from Sigi (who has changed back by now) and Dr. Gruselglatz and trap them between two doors. Then they opened the book and realize it only contains spare teeth, which Dracula wanted to keep a sceret. Sigi gets angry when hearing what all of this was about, with Dr. Gruselglatz defending himself that he couldn't have known.

Among many of his later appearances, he was mostly seen working for Fritz Fantom and using his abilities in his service. Once, for example, he has himself being brought into a history museum dressed as a blue mummy, where he switches off the alarm to let Fritz Fantom in. Another time, he torments an archeologist dressed as his terrible grandmother, demanding the black mirror, which can cause catastrophies to however looks inside, as Fritz Fantom wants its powers for blackmail.

From his first appearance, Sigi Schlitzohr was a master of disguise. He a red watch-like device can could turn him into the doppelgänger of anyone else, copying even their fingerprints, voices and eyes. He mostly used this ability to turn into the doppelgänger someone else he wanted to frame, or to disguise himself as some ghost to scare people away.

Given that in one episode, as mentioned above, he turned into a runner to be faster, it can be assumed that he also adopts people's abilities when copying them.

Later, he seemed to have lost the XX offscreen under unknown circumstances, instead he now used usual disguises (like fake beards or wigs) to disguise himself. However, this way of disguises was less useful when it came to impersonate others. In one episode, where he dressed up as a girl's piano teacher, she realized it couldn't be her. 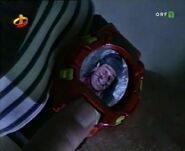 The XX, the device that grands Sigi his shape-shifting powers.