Find a worthy opponent so that he may know defeat

Sikorsky is a major character in the anime and manga series, Baki. He is one of the main antagonists of the Most Evil Death Row Convicts saga.

Not much is known about Sikorsky's early life, but it is implied he is ex-military and that, had he not become a criminal, he could have excelled in the Olympics and bring pride to his homeland of Russia.

In a moment of synchronicity, Sikorsky and four other death row convicts escaped from their prisons (for Sikorsky, he climbed out of the silo that was his prison) and headed to Tokyo with one goal in mind; to know defeat.

Sikorsky and the other inmates meet with Baki, Tokugawa, Doppo Orochi, Kaioh Retsu, and Shibukawa where they establish rules for the fights to come; anything goes anytime, anywhere.

Being well-suited for not playing by the rules, Sikorsky starts trouble by brutally scaring Igari. Igari later abducts Sikorsky to enact revenge, but it backfires as Sikorsky once again overpowers Igari and further humiliates him.

Though unknown circumstances, Sikorsky was hired by Yuujiro Hanma to kidnap his son Baki's girlfriend Kozue. Sikorsky is present with Yujiro and Kozue when Baki goes to rescue her. Baki fights Sikorsky and knocks him off a 27-th story window, but Sikorsky's inhumane ability to climb rough surfaces allows him to climb back up and challenge Baki again before the police arrive.

Sikorsky escapes through the sewers but is chased by Baki, who forces him to fight in the nude. Baki easily defeats him just as Biscuit Oliva, a special convicts hired to apprehend the escaped convicts, arrives. Sikorsky is defeated by Oliva and arrested.

Sikorsky later escapes police custody once again and stumbles upon a fight between Ryuukou Yanagi and Baki. Still angry at Baki for his past humiliation, Sikorsky teams up with Yanagi and fight Baki, though Baki eventually runs from the fight to save Kozue.

Sikorsky later attacks Baki's half-brother Jack Hanma in a telephone booth, but loses after an intense fight. Jack brings Sikorsky to the Underground Arena where he and another fighter named Gaia tag-team against him. Gaia's unorthodox technique of camouflaging himself before striking persistently angers Sikorsky, calling him a coward and demanding he fight like a man. However, Gaia quickly overpowers Sikorsky, making him increasingly afraid to the point of cowering in fear, admitting defeat.

Sikorsky is imprisoned again and increases his grip strength to the point of climbing a completely flat surface. 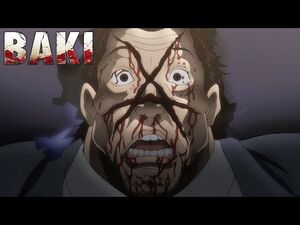