Informing Gutt of any potential additions

Aid Gutt in his vengeance against the Herd (failed).

Right-Hand Pirate
Silas is an antagonist in Ice Age: Continental Drift. He is a somewhat snobbish seabird from the south of France, and was a faithful member of Gutt's pirate crew, serving aboard the ape's iceberg-turned-ship as a scout, after Gutt had rescued Silas from danger in the past.

He was voiced by Alain Chabat, who also played Napoleon Bonaparte in Night at the Museum 2.

Silas patrolled the oceans in search of potential new crew mates or further additions to Gutt's growing bounty. Silas flew over the oceans one day, scouting for signs of life when he spotted a single chunk of ice adrift at sea, on which were a group of animals: a mammoth, two ground sloths, and a saber-tooth cat.

The group of castaway animals called out to Silas, deciding that where there were birds, land must be close. Silas, however, paid them no mind and instead flew back to the ship.

Upon reaching the ship, Silas perched himself on Gutt’s shoulder and informed the ape captain of his findings, stating that he had found a “huge bounty”, describing the mammoth as “very plump” and one of the sloths as “very smelly”, this news pleasing the captain. In the final battle in Continental Drift, he is seen throwing Gupta directly into Manny as a bomb, and later was blasted off the ship by the whale Precious. 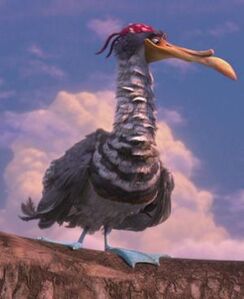 "It's a huge bounty mon capitaine. Four passengers,ripe for the taking. One very smelly and one very plump." - Silas report to captain gutt