The Messenger of God
Fantasma

Silas is the secondary antagonist in the controversial 2003 novel The Da Vinci Code, and the 2006 live action film adaptation of the same name.

During his childhood, in Marseille, Simon was badmouthed by his father, calling him "fantasma (ghost)" due to his being albino. Simon kills his father for killing her mother. While he grew up in the streets, he began eating garbage and waste. Other pedestrians ran away from him. Simon pummels a girl for making fun of his condition, but police gave him an ultimatum to either leave Marseille or go to prison, so he moved to Toulon where he usually lived in the street. While fighting two sailors, Simon killed one, and for this, he was imprisoned in the prison in the Pyrenees in Andorra. However, he was later freed when the earthquake destroyed the prison walls. He met a Spanish bishop named Manuel Aringarosa, who named him Silas, after a person in the Bible who was the companion of Paul of Tarsus, imprisoned at Philippi and freed by an earthquake after singing. Aringarosa eventually became a bishop and the head of Opus Dei. While chasing after Jacques Saunières in the Louvre, Silas demanded him the location of the Holy Grail, after Saunières answered him, Silas fatally shoot Saunières and left him for dead. Silas follows the information the Priory leaders to the Church of Saint-Sulpice gave. But, he reveals that he was duped with false information, and he kills Sister Sandrine Bieil for spying on him in the church. At London, when Silas saw the police, he ran out from safe, but later he accidentally shot Bishop Aringarosa, then Silas was shot in turn. Before dying, he said "soy un fantasma (i am a ghost)". 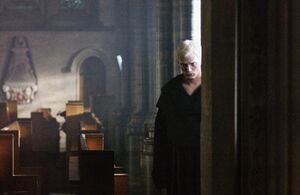 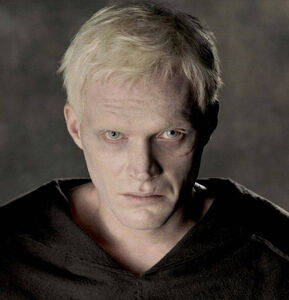 Retrieved from "https://villains.fandom.com/wiki/Silas_(The_Da_Vinci_Code)?oldid=3339194"
Community content is available under CC-BY-SA unless otherwise noted.