Silas Scratch is a fictional ghost story character that plays a major role in the book Diary of a Wimpy Kid: Old School, the tenth entry in the Diary of a Wimpy Kid series by Jeff Kinney. He makes his first appearance in the book when Greg makes his way to camp. The fear of the character among the residents and guests of Hardscrabble Farms is a major plot device within the book, but the whole legend turns out to be a hoax.

Silas Scratch's legend is described by the book Old School. In the story, he was once a farmer but was removed from his land by the county. With no place to live, Silas Scratch dwelled in the forest, surviving off of slugs and berries in a makeshift shack. Eventually, he went crazy and grew his fingernails out really long. He then began to attack campers and workers at Hardscrabble Farms, the camp that was built on his former farmland.

As the book progresses, some campers add onto the legend. Some say that he died and that the creature that lurks on the campground is his zombie. One claims that Silas Scratch has a series of tunnels underneath the camp, allowing him to travel quickly.

In the book, Greg and the campers at Hardscrabble Farms are terrified by the story of Silas Scratch, which has been around for decades. Many of them fear that he will attack them if they stay out in the woods at night. The story keeps on escalating, with kids adding on points about him being undead and having a tunnel system beneath the camp. After Greg's father, Frank, comes to camp as an emergency chaperone, he tells that Silas Scratch allegedly has a shack in the woods, and that anyone who goes into the shack never returns.

Later, Greg gets lost and stumbles across the shack in the woods. He reluctantly goes inside, only to find a maintenance shack with a toilet and shower. He bumps into Frank, who reveals that, when he was a kid and forced to go to Hardscrabble Farms, he found the maintenance shack and decided to use it to avoid the terrible bathroom and shower situations in the camp. He started the story of Silas Scratch and decorated the building's exterior to look like Scratch's home so that he could keep the toilet and shower to himself. Upon returning, Frank decided to use it again. Greg decides to keep quiet and allow the myth to continue.

Silas Scratch's first appearance was in the August 2012 issue of Boy's Life. In this version, he is made up by Greg on the spot as a ghost story during a backyard campout. He has a slightly different appearance and is told to actually eat campers. Greg and Rowley get too scared by the story and end up fleeing the camp upon hearing a raccoon scratching at their food supply. This version is implied to be non-cannon.

Silas Scratch appears as a skinny, elderly man in a torn loincloth and thin hair. His fingernails are long and sharp.

In the Boy's Life version, his hair is thicker and his nails are shorter. 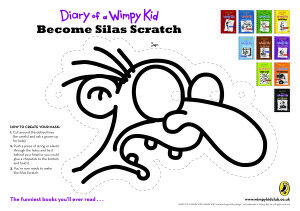 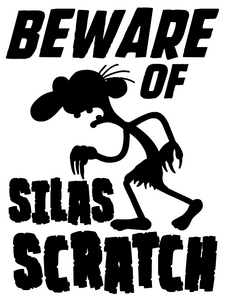 Retrieved from "https://villains.fandom.com/wiki/Silas_Scratch?oldid=4215581"
Community content is available under CC-BY-SA unless otherwise noted.