Yes-Man
The Spetsnaz Commander, also referred to as Silent Mastodon, is a minor antagonist of Metal Gear Solid V: The Phantom Pain. He is the Commander of the Soviet unit occupying the Afghanistan village of Da Shago Kallai.

The Spetsnaz commander, described as "tough and experienced" took over Da Shago Kallai as with a Spetsnaz GRU recon detail, as part of his secret involvement in the Soviet's Scorched Earth Operation. This was a strategic bombing campaign to wipe out the Mujahideen guerillas that opposed the Soviets, destroying several villages. The commander disguised himself as a common soldier, but still retained his red beret. He was also rumoured to have been responsible for the extermination of the Hamid fighters at Da Smasei Laman, with civilian casualties, even within Soviet ranks. As he served as a threat to the Mujahideen, the West hired Diamond Dogs to get rid of him, which their subcommander Kazuhira Miller accepted.

In the mission A Hero's Way, Venom Snake was sent to his location, being advised to keep him alive by Miller, due to his useful skills. During this time, the commander discussed the rumours with his men, which he vehemently denied. After Snake eventually located him hiding in his office, and Snake neutralized him. If interrogated, he reveals that he was not responsible for the extermination of the Hamid fighters, implying that XOF's Parasite Unit were actually responsible, and of a hidden object at that location. If accused of casualties during Scorched Earth Operations, he swears that he and his forces never actually killed any of the villagers.

If the player chooses to capture him rather than kill him, Silent Mastodon becomes a member of Diamond Dogs, and can be a playable character. He is extremely skilled with guns. 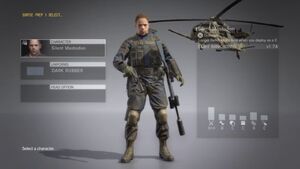 Silent Mastodon being selected for a mission. 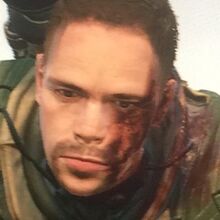