He was voiced by Jason Spisak, who also voiced Vulpes Inculta in Fallout: New Vegas, Silas in The Vampire Diaries, Packrat in the same 2016 Powerpuff Girls series, Jason Dante in The Uncharted: Golden abyss, Oswald Cobblepot in Telltale's Batman, Scorpion in Marvel's Spider-Man, Deag Ranak in Doom: Eternal, and Joker in Batman: Hush.

Silico's speech pattern are commonly emotionless and robotic. Beneath his genius-level intellect lies a cunning, manipulative, vindictive and diabolical mastermind with a personal vendetta against the Powerpuff Girls.

Prior to the event of the series, Silico had a lonely childhood. He did not had a lot of companions, as he didn't have a lot of friends, and his parents were barely there for him. Eventually, he discovered his own talents in technological engineering. Using his knowledge and skill in this field, he was able to create robots that would keep him company. For the first time, he felt loved.

Silico makes his debut in the episode "Viral Spiral" where he teams up with the Amoeba Boys to ruin Bubbles' new internet game.  He approached the boys and provided them with a micro-chip, claiming it will to wipe out the internet and cause worldwide catastrophe. The Amoeba Boys initially weren't interested in his plan until Silico added it would really annoy The Powerpuff Girls.

The Amoeba Boys were transported into the Internet, tasked to place the micro ship at the core of the internet, but were eventually defeated by The Powerpuff Girls. However, they remained unaware of the chip or why the Amoeba Boys were able to access the net in the first place.  Small viruses emerged from the chip, which began to spread through the internet and transmit information to Silico.  He commented how The Powerpuff Girls may have won the battle, but they've already lost the "war".

Silico made his next appearance as the main antagonist of the episode "Halt and Catch Silico", where he begins posting false articles about the citizens of Townsvile. He then begins posting false and embarrassing articles about The Powerpuff Girls (I.E "Blossom doesn't wash hands after porta-poopin' and Buttercup wears Toupee), in order to damage their reputation, which caused the citizens of Townsvile to form a mob against them.

They eventually figured out that the articles were coming from Silico Industries and decided to pay him a visit. Upon arriving, Silico confronted the girls for the first time by projecting a hologram of himself.  Blossom asked Silico to stop posting the false information, but Silico refuses, saying he wouldn't after they did to him in the past.  This prompted Buttercup to attack the hologram.  Silico berates them for predicatively resorting to violence before summoning his robot minions to defeat them.

The girls soon discover that some of the robots are merely holograms, making it difficult to tell between the fake and the real ones.  Blossom then devises of plan of going after Silico while Bubbles and Buttercup handled the robots, but Silico was able to protect himself by projecting holograms of fake articles about her.  However, he pushed his luck too far by calling her "disorganized".  Enraged, Blossom hurled her light pin constructs, causing damage throughout the entire building.  She was able to get a shot off on Silico's control booth, shutting down his robots and holograms.

With Silico defeated, Blossom asked why Silico holds a grudge against them, which Silico tells them his past and how his house and robots destroyed by The Powerpuff Girls. The girls, however, thinks the robots were mere "toys", and Buttercup says Silico is "Messed Up". Silico concur, but says they messed up him, and vow that someday he'll messed them up before disappearing. Bubbles and Blossom begins to feel sorry for him, and Blossom says while there's nothing they can do about their past mistakes, they can make up for their current ones. This encourage them to visit Mojo Jojo to apologize for wrongfully beating him up (As Silico posted an article about him cooking kittens earlier), only to beat him up again when they discover Mojo Jojo was building a kitten army. Silico is last seen on Mojo Jojo's computer laughing.

Silico returns in "Take Your Kids to Dooms Day", where he disguised himself as the Professor's boss, Miss Lacosi. Later, he ultimately reveals himself after he stole the Professor's power suit. Silico also reveals that the workers of Techo Industries were just holograms. He easily defeats the Powerpuff Girls with the power suit, but he is defeated at his own game by the Professor who has his own power suit with a few upgrades and had discovered Silico's plans from the beginning. He gets beaten up by the Professor and is bashed into the stage floor.

He seemingly escaped, returning in "The Trouble With Bubbles", where he hacks Bubbles' 3D printer to create a clone of her.  He uses to clone to lure the Powerpuff Girls to a pancake factory, where he sics the clone on them.  The clone manages to best the heroines and prepares to finish them off, until a cat outside distracts the clone, still imbued with Bubbles' personality.  Frustrated, Silico activates the clone's self-destruct sequence and attempts to flee, only to be thwarted by the clone, who grabs hold of him just as it explodes.  The girls believe Silico to have finally perished, but he's revealed to have survived and uses Bubbles' printer to create a 3D clone of himself, which takes the image of the Professor.  Silico laughs as the episode ends on an ominous note. 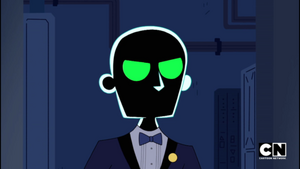