The Silurians (also known as Eocene, Homo Reptilia and Psionosauropodomorpha) are on/off antagonists in Doctor Who, making their first appearance in the 1970 episode Doctor Who and the Silurians.

They are a type of intelligent three-eyed (sometimes two-eyed) reptiles which evolved on Earth before the age of mankind.

The so called "Silurians" evolved on Earth in prehistoric times, acting as the original masters of the planet. They developed advanced technology, and were able to control the animals, such as the Dinosaurs and the apes that would one day evolve into humanity. There were many different types of Silurians, with some being heavily reptilian, with a third eye that had telepathic abilities, which they could use to defend themselves, and were later called the "Scholar caste". The other breed were far more humanoid, using more typical handheld weapons, being identified as the "Warrior caste". As well as this, the Silurians lived alongside their "cousins" who had evolved for living underwater, later known as the Sea Devils.

Their reign over Earth would end when the Silurians spotted a seeming small rogue planet heading for them. Believing that it would temporarily draw the planet's atmosphere away, destroying all life on the surface, they fled to specially prepared underground shelters. They planned to wait out the disaster, but they were wrong about the nature of the "rogue planet", which did not wipe out life on Earth, but rather go into orbit as the Moon. The Silurians would sleep for millions of years, completely unaware of humanity's evolution.

Awakenings in the 20th century

In Doctor Who and the Silurians, a dormant Silurian colony was revived from suspended animation due to the power leaks from a neighbouring underground atomic research centre at Wenley Moor. The Third Doctor discovered their existence while investigating the power losses and a maddened human scientist at the research centre. A Silurian was wounded by Major Baker in the caves, and went on a pained rampage across the countryside, until the Doctor returned it to it's tribe. The Doctor tried to convince the Silurians and the humans that mankind and the Silurians could share the planet. The older Silurian leader, known as Okdel, was open to negotiations between the two species, but he was killed by the younger Morka (who was against this suggestion), who took command along with a Scientist.

Morka attempted to wipe humanity with a plague that had been engineered against their ape ancestors. After the Doctor and his companion Liz Shaw found a cure for the virus, the Silurians had stormed the research centre with plans to revive the rest of their race and destroy mankind by destroying the Van Allen Belt, which would unleash solar radiation deadly to humans, but beneficial to reptiles. The Doctor tricked them into going back into hibernation by overloading the reactor core, and hoped he could in time negotiate with them one by one. The Brigadier, under orders from his superiors, instead took this opportunity to blow up the underground chambers much to The Doctor's disgust.

Silurians have made several appearances and are recurring enemies of the Doctor, also allying other enemies like the Master and their aquatic cousins the Sea Devils.

In his eleventh incarnation, the Doctor encountered some mutated Silurians in an underground city, where he tried to help them making peace with the Humans, but failed, as the Silurian hostage Alaya was killed and her sister Restac wanted vengeance. However, some Silurians reappeared along with the Daleks, the Cybermen, the Judoon, the Sontarans and other enemies of the Doctor to help trapping him in the Pandorica.

At some point in time, the Silurians had sent a ship to space, which was however boarded by Solomon, who killed the Silurians on board. Another Silurian named Malohkeh (who was killed by Restac in the original timeline) appeared as Winston Churchill's Doctor in an alternative timeline, which was created when River Song refused to kill the Doctor.

A single Silurian named Vastra allied with the Eleventh Doctor to fight Madame Kovarian and rescue Amy Pond together with Dorium Maldovar, some Judoon, "Danny Boy", Sontaran Commander Strax, and the pirate Henry Avery. Later, she and Starx would also help the Doctor fighting Winifred Gillyflower, her parasite Mr Sweet and the Great Intelligence. She, her human wife Jenny and a Sontaran named Strax later aided the Twelfth Doctor in the battle against the Half Face Man and the other Clockwork Repair Droids. 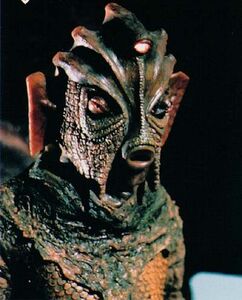 A Silurian from Doctor Who and the Silurians. 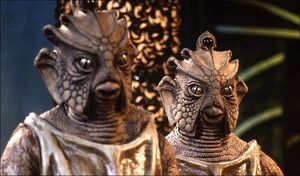 Two Silurians from Warriors of the Deep. 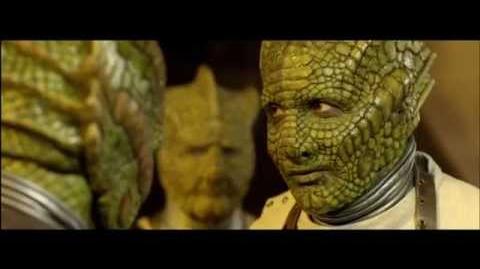 Doctor Who Monster Files - The Silurians