Protecting secrets of G-Men. (comics only)

Fighting crime unlawfully amongst her teammates. (comics only)

Silver Kincaid or better known by her Amazon series counterpart Cindy, is a minor, antagonistic anti-heroine of the controversial comic book series The Boys and a minor antagonist of the Amazon series adaption of the same name.

In the series, she is portrayed by Ess Hödlmoser.

When Silver Kincaid was eight years old, a pony she was riding on went crazy and ran five miles before her father caught them, this caused her hair to go white overnight from the shock of the incident. Later her Uncle Paul took her to Cranbrook for an ice-cream but had forgotten his change in a souvenir shop so he went back inside for half a minute but when he returned she was gone. The authorities looked for her everywhere but in vain. As it turned out, she was kidnapped by John Godolkin to be injected by Compound V and trained at his facility as a future superhero and member of the G-Men, and just like the rest of his "students", she was often sexually abused and raped by John himself. Due to being unable to cope with the grief of losing their child, Kincaid's mother began to suffer from cancer and die eventually while her father committed suicide afterward.

As a member of G-Men, Kincaid would go on to do John Godolkin's dirty work for him alongside her teammates, covering up any crimes and secrets of John as well as killing countless amount of people and supes who were against John and Vought. Due to her experiences, she sunk into a severe depression and became mentally fragile which prompted Susan Raynor to reach out to her to work for the CIA as an informant to expose Godolkin and his crimes. She agrees but soon suffered a mental breakdown which caused her to commit suicide using her own powers. Although her funeral was attended by her teammates, it is revealed that they hated her and suspected her to be working with the CIA which contributed to the deterioration of her mental health.

Known as Cindy in the TV series, she is first seen in Sage Grove Mental Institution, staring into the CCTV cameras from her cell as Frenchie, Mother's Milk, and Kimiko looks on from the security room. Later on, a confrontation between them and Lamplighter frees Cindy by accident. Lamplighter proceeds to attempt to calm her down before she gets shot multiple times by a Vought officer, she then proceeds to use her powers, causing various officers and guards to explode from head to toe. She proceeds to free the rest of the supes held captive there.

Afterwards, as she heads for the exit, she comes across Stormfront who electrocutes her till she faints. Much later, she escapes and is seen hitchhiking a ride from a random stranger in the middle of the highway.

Telekenisis- She has a unique type of telekinesis that allows her to crush objects as strong as metal doors capable of trapping other supes. She can also crush people.

Ergokinesis- She is able to manipulate the energy of her surroundings or other supes and uses it against them.

Gravokinesis- Her powers seem psychic and gravitational which is related to pressure. She could use her powers to lethal effect, and has used her powers in numerous superheroes as well as used on herself as a way to commit suicide, blood streaming from her eyes ears and mouth.

Superhuman strength- Just like most supes, she has basic super strength capable of defeating any regular human or any mortal being despite their fitness or training.

Superhuman durability- She is able to withstand several fatal gunshots and not die.

Silver Kincaid as a CIA Informant.

Silver Kincaid killing herself by using her powers. 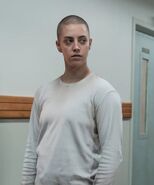