Villains Wiki
Register
Don't have an account?
Sign In
Advertisement
in: Wolverine Villains, Power Hungry, Related to Hero,
and 53 more

NOTE: This article is about the incarnation of Silver Samurai from the X-Men film series. The mainstream version can be found here: Silver Samurai (Marvel).

Finding ways to extend his lifespan.

Gain Logan's immortality by taking it from him so he can de-age and become immortal (failed).

Ichirō Yashida, better known as the Silver Samurai, is the main antagonist of the 2013 superhero film The Wolverine, the sixth installment of the X-Men film series.

He is a former Japanese officer, who was saved by Wolverine during World War II, who founded the Yashida Corporation. Years later, Yashida requests Wolverine to come to Japan to see him on his deathbed, apparently to offer him the possibility of making him mortal so he doesn't have ot live for eternity. However, it later turns out that Yashida secretly hired Madame Viper to extract Wolverine's immortality so he can be cured of his cancer and live forever.

He was portrayed by Haruhiko Yamanouchi.

During the Nagasaki bombing on August 9, 1945, Yashida was saved by James "Logan" Howlett, also known as the "Wolverine", at a prisoners of war camp where Logan was being detained. He had become fascinated with Wolverine's healing powers, envious even In subsequent years he became head of a powerful Japanese company, as well as having a son, Shingen Yashida, who in turn had a daughter, Mariko, whom he became more attached to rather than Shingen, much to Shingen's chagrin.

Many years later, one of his granddaughter's servants, Yukio, was sent to get Logan to meet Yashida as he was dying. Upon his arrival, Yashida offered to take his eternity away so he can attain the mortality he seek. But Logan, surprised and confused whether such thing is possible, refused. Yashida said then he must protect his granddaughter, Mariko, from her father, as he had entrusted his fortune to her and not Shingen. Yashida's doctor, a woman known only as "Viper", injected a robotic parasite into Logan, taking away his healing factor. However, later that night, Yashida apparently died.

It was later revealed, according to Japan's Minister of Justice, Noburo Mori, that Yashida had faked his death and paid billions of dollars to make an armor made of adamantium, or the Silver Samurai armor, and almost put his company, Yashida Industries, into bankruptcy. He battled Wolverine and cut off his claws. He then started to extract his immortality away as he is talking about his true nature claiming he will finally grant Wolverine peace in death but before he can regain his youth he was stopped by Mariko and then killed by Wolverine by being pushed off his birthplace to his death. It is unknown as to whether or not he is killed in the alternate timeline as well. 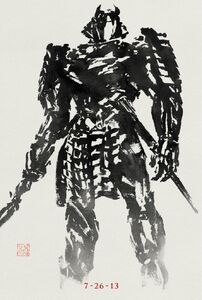 A promotional poster of the Silver Samurai. 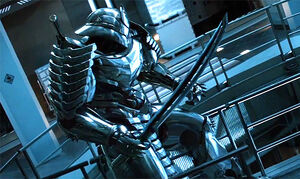 Yashida as the Silver Samurai.

Yashida revealing himself to Logan in the Samurai Suit.

Yashida becoming younger during the fight between him and Logan.

Yashida being stabbed by Logan.

Yashida's final moments before being thrown out by Logan. 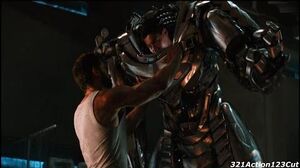