Simacore is an aggressive Bornean Orangutan-like Decepticon scientist and a Deployer with two Mini-Cons named Axiom and Theorem.

Simacore and his Min-Cons were arrested and placed on the Alchemor for assault when Simacore violently took his frustration out on his colleagues when his latest experiment went wrong. However, they broke out when the prison ship crashed on Earth. Once freed, they decided to build a Cybertronian starship and one of the parts needed was a particle accelerator circuit board, so they tried to steal one from a science laboratory.

The Autobots Bumblebee, Strongarm, and Grimlock came and fought them, but were at a disadvantage because Grimlock's newfound intellect had rendered him clumsy and took control of his fighting reflexes. Fortunately, Grimlock managed to outwit the Decepticon by grabbing the circuit board from him when he wasn't looking. When Simacore found out, he knocked out Bumblebee and Strongarm while they were fighting Axiom and Theorem before transforming and going after Grimlock with his Mini-Cons.

However, Grimlock had locked himself in a research lab and when Simacore tried to beat the door down, he couldn't. When he ordered his Mini-Cons to cut through the doors, they couldn't either. Therefore, Simacore magnetized the other Autobots in front of the particle accelerator cannon and threatened to kill them with it if Grimlock refused to surrender the circuit Board.

Denny, Russell and Fixit managed to cure Grimlock of his new intelligence, yet left him immobilized in the process. Fortunately since Grimlock was slowly regaining his mobility, he challenged Simacore to a battle of wits. If Grimlock won, Simacore would release his friends and if Simacore won, he would Beat Grimlock to death and take the circuit board himself.

Since Grimlock was the challenger Simacore and asked how long it would take for unirails from Crystal City and Nuon City to meet when they both left there stations. However, Grimlock realized it was a trick question since the Underbite ate Nuon City; technically, it does not have a unirail. Grimclock then asked his question and while Simacore was figuring out the answer, Grimlock recovered and transformed to take down the Decepticon with his cannonball attack. After rescuing his friends, Grimlock and the other Autobots took Simacore, Axiom, and Theorem back to the scrapyard to be placed into stasis pods. 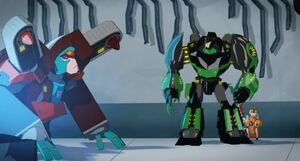 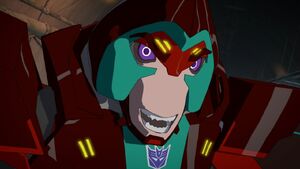 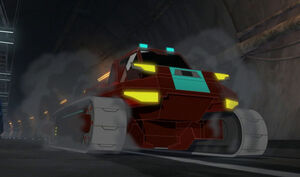 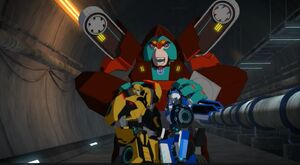 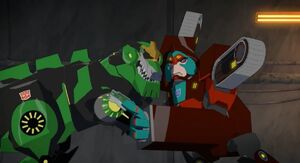 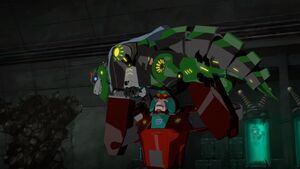 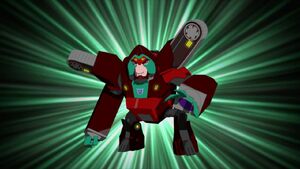 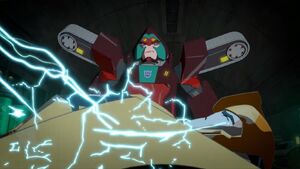 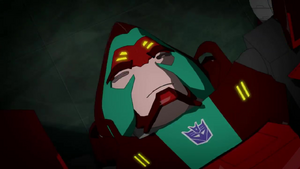 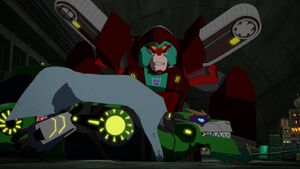 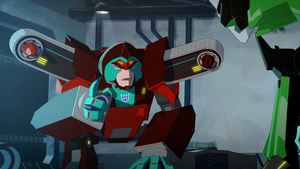 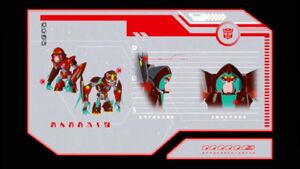