Simeon is the main antagonist in Primrose's story in Octopath Traveler. He is the head of the Crow Men, the master of the Obsidians, and the bane of Primrose's existence. As master of his "Wings", Simeon has a hand in all forms of mass murder, assassinations, and human trafficking, all while eliminating anyone who could stand up to his organization's rule.

Before the events of Primrose's story, Simeon's family, the Ventus Dynasty, began to fight each-other over the throne, with him defeating his older brother in combat for it. However, he would go missing later, and it is theorized he gained the ability to slow or stop his aging from Lyblac. He then met Mattias, and together, they form the Obsidians.

Later, Simeon murders the girl's father while undercover due to the man discovering the relations between the Obsidians and Mattias, while having a twisted sense of love for Primrose in the form of wanting her to suffer.

Ten years after this, he meets her in Noblecourt to tell the details of his deed, appearing after Revello leaves to stab her. He then goes to Everhold to create a satirical play about her life as a distraction, as she meets him on a balcony. Simeon tries to convince the dancer that her quest for vengeance wouldn't please her father, but she ignores his words and fights the man. Simeon loves the end to her story, and accepts his fate, being defeated and fatally stabbed.

Simeon has long silver hair in a braid and wears a coat and black cape. The mark of the crow is on his neck, which he conceals with a scarf.

Simeon is a complete psychopath who gets the most joy out of life by hurting and tormenting others. He is considered to be the worst out of all the Crows.

One of Simeon's marionettes.

Another one of Simeon's marionettes. 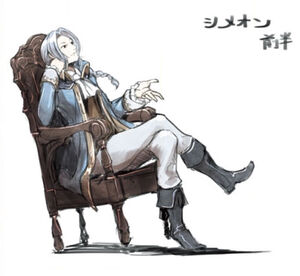 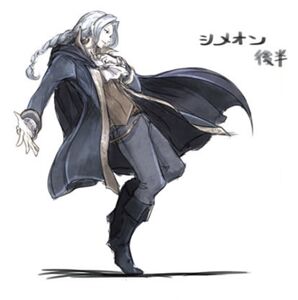 Add a photo to this gallery
Retrieved from "https://villains.fandom.com/wiki/Simeon_(Octopath_Traveler)?oldid=3708961"
Community content is available under CC-BY-SA unless otherwise noted.