Sim (by Ben and Kevin)

Earn a fortune from his scheming abilities.

Simian is an Arachnichimp, and is one of the many antagonists in the Ben 10 franchise.

Simian bears a strong resemblance to Spidermonkey being an Arachnichimp. However, he has yellow eyes instead of green and stripes on his tail.

In Ben 10: Omniverse, he still looks like Spidermonkey, but now has black eyes and yellow pupils. He now has a flipped-up, white hairstyle. In addition, he wears clothing now, notably a pink shirt. He also now has two white stripes on his tail.

Simian first appeared in "Birds of a Feathers", when he made a deal with the Highbreed to steal the crystalized power source on the moon. He is first seen rescuing Ben's Team from a swarm of DNAliens. However, he claims to have never heard them. Later, Ben as Goop finds Simian stealing from a nearby cryogenics lab and scolds him for being a common thief. Simian lies pretending to be a prince of his home planet and that the power source is a symbol that was "stolen" from them. Ben agrees to travel with Simian to "reclaim" his "throne", dragging Gwen and Kevin with him. During the journey, however, Simian's true colors are revealed when he tried to kill Lu the security guard whom Ben saved as Big Chill. Simian grudgingly reveals the truth about the crystal and the moon's station and forcibly abandons the crew on the moon, only to realize too late that Ben secretly switched the crystal with the DNAlien ear cleaner with strong acid (which Gwen and Kevin recovered during their battle in the beginning of the episode). Thinking it is a joke from Simian, the Highbreed that hired him seemingly killed him offscreen with it (although it is later revealed that the Highbreed changed his mind and decided to lock him up instead).

Simian re-appears in "Simian Says", where he escapes custody from the Highbreed and returns to Arachnammania. Simian unwittingly delivers a Xenocyte to an Arachnachimp crime lord named Mizaru, only for it to break out of its jar and forcibly leech itself on Mizaru's face as its new host. Mizaru manages to manufacture hundreds of these Xenocytes and infects the rest of the planet, turning them into his army of DNAlien Arachnachimps. Desperate to rescue his people, Simian seeks Ben's Team for help. The team reluctantly agrees and Simian leads them to his home planet, where the four unsuccessfully try to cure the citizens using the DNAlien repair guns. They then run into Eunice, who also came to rescue the planet's people from the DNAliens. Eunice explains that the guns don't work because they were designed to only cure human DNA and instead plans on curing the planet with the machine from her ship. Since the machine require the DNA of an unaffected Arachnachimp to work, Simian volunteers to be the donor which proved successful. While scavenging the ruins of Mizaru's palace, Simian comes across the same Xenocyte that infected Mizaru earlier. Simian realizes the power it can give him if he puts it on, but can't bring himself to do so and destroys it, much to Ben's delight. Simian is last seen selling the DNA Repair Guns to Milleous and the Incursean Empire, thus reverting back to his criminal ways (meaning Kevin was right about him).

Simian made a voice cameo in "Bros In Space" when Ben, Rook and Young One listened to his show. Simian re-appeared in "Collect This", where it is revealed he is working with a Lenopan actor named Deefus Vlipsurg ,who is impersonating Ben on TV shows (similar to Albedo impersonating Ben in a play called "Ben 10 Live" in "Double or Nothing"). Simian plays the role of the sidekick named "Gwevin"(a pun on Gwen and Kevin's names) and wears a wig identical to Gwen's hair. He is first seen during a staged robbery in Undertown, where he tackles Ben as Artiguana and asks him to play along, although Ben is hesitant after Simian sold the DNA repair guns in his previous appearance. Simian and Deefus expand the robbery scene around Bellwood, with Solid Plugg playing the villain and Blarney T. Hokestar as the cameraman. However, Simian double-crosses the crew by tricking them into ingraining "Ben 10" on the top of a mountain, which summoned an evil alien collector named Collectimus. Simian offers to sell him Earth and Collectimus encases it a giant cube-like forcefield, but he also refuses to pay Simian and instead traps him in one of his collectable cards. Before he can do the same to Earth, Ben offers him one of his old T-Shirts. Collectimus agrees, taking both the shirt and Simian. 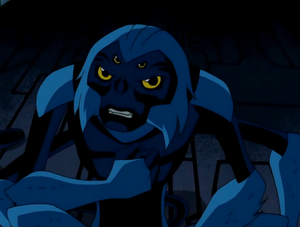 In Alien Force, and Ultimate Alien