Founder and leader of the Vortex Organization
Terrorist

Drug MI7's head Pamela Thorton with the Timoxelien Barbebuttenol in order to manipulate her into assassinating the Chinese premier Xiang Ping.

Simon Ambrose is the main antagonist in the 2011 film Johnny English Reborn. He is known as the best fictional agent of MI7, but it is revealed that he is also one of the three founding members of Vortex, a secret organization of hired assassins.

He was portrayed by Dominic West, who also portrays Fred Casely in Chicago, Theron in 300, Jigsaw in Punisher: War Zone, Sab Than in John Carter and Walt Camby in Money Monster.

Simon Ambrose joined MI7 in his youth and became their best agent, being hailed by the organization, and agent Johnny English, who looked up to him. Unbeknownst to the agency, Ambrose co-founded Vortex, a secret organization of hired assassins that was created presumably in the early 2000s.

In 2006, Ambrose and Vortex were behind the death of President Chamboa in Mozambique, and the group plans to assassinate Chinese Premier Xiang Ping. Vortex also acquired a drug called "Timoxeline Barbebutenol", a discontinued government weapon which allows one to control a person's actions through verbal orders for short span of time before the drug administers a heart attack, killing the victim.

When English accidentally drinks the drug meant for Thornton, Ambrose decides to use him to commit the crime, but English fights for control. Seeing that English is strong enough to not be subdued with the drug, Ambrose flees in a cable-car. English catches up to Ambrose, and the two have a fist fight which ends with English falling out of the cable-car. When Ambrose starts firing a gun at English, English grabs from his sock an umbrella-shaped gadget, which he thinks is a bulletproof shield, yet it proves ineffective. English frustratingly closes it, revealing the gadget to actually be a rocket launcher. A missile fires from the tip of the umbrella into the cable car, causing an explosion that destroys the car and incinerates Ambrose off-screen.

Simon Ambrose initially appears to be a polite and friendly man. But in reality, he is an extremely cruel, psychopathic, and sadistic man. He has no problem betraying others such as when he frames Johnny English, who used to look up on him, as the third Vortex member.

Due to his MI7 training, Simon Ambrose was an extremely competent operative who was experienced in various areas. For starters, he was a highly intelligent man who has been able to organize and oversee various Vortex plots through the years, such as the murder of President Chambal in 2006 and the assassination attempt of Xiang Ping in 2011. An expert tactician and strategist, Ambrose was able to hide his terrorist activities at MI7 without anybody from the service doubting his true nature, probably because he was considered their best agent. In addition, he was able to manipulate several political and administrative powers in his plots as several of his associates (including Michael Tembe and Titus Fisher) were responding to senior officials while working for him.

However, as the film unfolds, it becomes clear that Ambrose's great intellect is not his only ability. He was able to use sophisticated weapons like Timoxeline Barbebutenol and to efficiently direct Vortex and his numerous agents in his plots. Finally, he was an effective hand-to-hand fighter who was able to defend himself against Johnny English in their climactic confrontation. 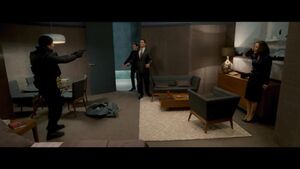 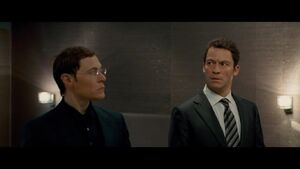 Ambrose with his Vortex assistant, Slater. 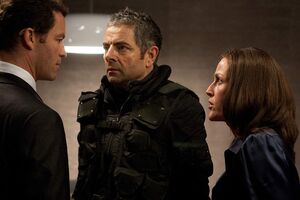 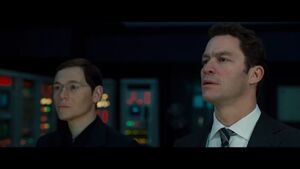 Ambrose frames Johnny English as the third member of Vortex