Tragic Parent
Simon Barrows is a minor, yet pivotal antagonist in the survival horror game, Clock Tower: The First Fear.

Simon is the father of Bobby and Dan Barrows, and a member of the Barrows family.

Simon Barrows appears as a middle-aged man with untidy hair and a haggard appearance. Due to being locked up in the shed for a long period of time, he wears filthy and worn-out clothing.

Simon is a member of the Barrows family, he is described by his butler Rick was being wise, courageous and kind.

Simon was aware about his family's curse and it's clan, known as the The Great Father which threatened to produce yet more monsters, despite many decades of peace. Some time later, he had twin boys with his wife, Mary Barrows and named them Bobby and Dan Barrows.

However, the twins were demons, Simon resolved to fight the dark god; he fired all his servants, including Rick, and steadily made his preparations for his battle. Mary became involved with black magic. Simon anxiously watched his wife, and decided to murder her at the point when Mary, along with her brother, planned to commit murder for sacrifices for the black magic ritual.

In retaliation, Mary locked Simon in the shed for an unspecified amount of time. Mary originally intended to kill Simon, but kept him trapped to make him suffer more, possibly for years.

When Jennifer wanders around the mansion, she can come across Simon locked up in the shed. Any attempt to talk to him will only have him speaking his desire for food.

If Jennifer drinks the poisoned drink that Mary gives her, she will be thrown into the same cell with him. If Jennifer didn't pick up the ham from the kitchen, he will eat her and the game will end. However, if the ham is given to him, he will cease attempting to eat her and give her subtle clues about the Barrows, such as mentioning "The Cradle under the Star" as well introducing himself as Simon Barrows.

In the official novel of the game Clock Tower 2, it is mentioned that Simon died. It is not explained how it happened exactly, but it is presumed that he was murdered by Dan Barrows after "reborn" as Edward, as Simon would be a vital witness if he survived. 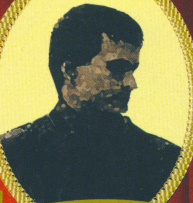 Artwork from Way To Capture Victory. 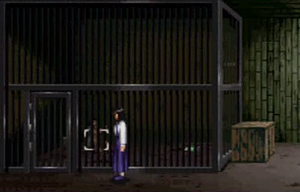 Simon locked up in a cage in the shed.

Jennifer attempting to talk with Simon. 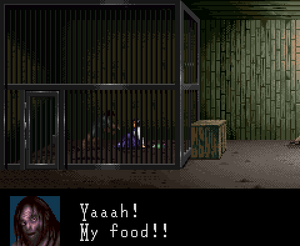 Simon attacking Jennifer (if she does not give him the ham). 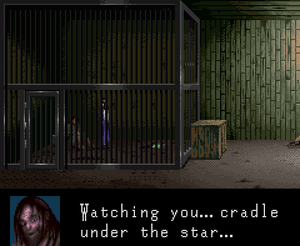 Simon talking to Jennifer (if provided with the ham).
Add a photo to this gallery

Retrieved from "https://villains.fandom.com/wiki/Simon_Barrows?oldid=3542430"
Community content is available under CC-BY-SA unless otherwise noted.