Steward aboard the Titanic cruise liner

Escape the Titanic ship's sinking (succeeded at first but failed).

Simon Doonan is the main antagonist of the 1996 Titanic TV movie.

He was portrayed by Tim Curry who voiced Professor Calamitous in The Adventures of Jimmy Neutron: Boy Genius and is also known for portraying Lord of Darkness in Legend, Pennywise the Dancing Clown in Stephen King's IT and Hexxus in FernGully: The Last Rainforest.

Crewman Simon Doonan befriends Jamie Perse, a fellow criminal who stole a ticket to board Titanic. Doonan gives his hat to Jamie in order to disguise himself so that two cops won't catch him. They succeed in hiding from the cops. Doonan plans for him and Jamie to steal numerous gold and jewelry from the rich passenger on the ship. However things go out the window when Jamie falls in love another passenger name Aase Ludvigsen.

Determined to separate the two Doonan rapes and beats up Aase in the third class showers on the night of Titanic's sinking, covering her mouth as she tries to call for help, causing her causing her to lose her faith and free will to live, even though he was warned by Jamie to stay away from her, after Doonan rapes her he manipulates Jamie from finding out the truth by forcing Jamie to abandon her, much to Jamie's chagrin and later locks the gates to third class preventing them from reaching the decks. After the ship hits an iceberg and begins to sink, Jamie confronts Doonan in his stateroom where he gives him Diamond Tiara and he puts the gold he stole in a bag Doonan is ready to board a lifeboat by disguising himself as a woman since were not allowed by officers to board a lifeboat but Jamie objects on going since they would be taking spots from women and children.

Doonan responds, "some poor cows and their matey kids down in steerage will never know the difference" and refuses to help Jamie help the steerage passengers escape by making discrimination comments against them Jamie is disgusted and angered by his comments and finally realizes his true nature and in fact that he has raped Aase. Jamie punches him and Doonan falls into the bed Jamie demands to know what Doonan did to her Doonan retorts by gaining the upper hand and pinning him to the wall and states that she was "begging" for it and continues to assault him before kicking him and saying "your going down with the ship" Jamie retorts by saying if that happens he wont be needing no tiara as Jamie leaves his room Doonan shouts "Save yourself boy! Save yourself!".

When Titanic begins to sink Jamie has Aase get into Isabelle's lifeboat unknown to Jamie, Aase, and Isabelle Doonan sneaks on to Isabelle and Aase's lifeboat by disguising himself ad an old woman since men were not allowed to board a lifeboat.

Later after the Titanic sinks one of the women named Aase begs Fifth Officer Harold Lowe to go back and help dying passengers in the freezing water and reveals himself to the passengers in the lifeboat. Aase attempts to fight Doonan she call him and animal and tries to knock him of the lifeboat however he gets the upper hand and throws her off the lifeboat he then pulls out a gun and orders the passenger in the lifeboat to sit down otherwise he will shoot them Isabelle tells him animals like him wouldn't do this to their own kind. She and Officer Lowe attempt to rescue Aase from the freezing water by having her reach the oar of the boat when her order them to sit down again Officer Lowe snaps at him hitting by whacking him with an oar causing Doonan to snap his neck and fall back into the water, killing him.

Doonan's dead body is then shown floating in the freezing water with money floating around him. As a result of being thrown in the ice cold water by Doonan Aase suffers from mild hypothermia and is taken to the hospital aboard another ship Carpathia. 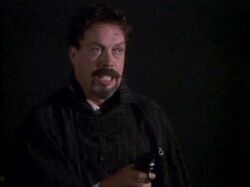 Doonan's breakdown
Add a photo to this gallery
Retrieved from "https://villains.fandom.com/wiki/Simon_Doonan?oldid=3553192"
Community content is available under CC-BY-SA unless otherwise noted.