Co-leader of the NWA (formerly)

Get rid of the people problems in Sandford so he and the NWA can win Village of the Year (failed).

Simon Skinner is the secondary antagonist of Hot Fuzz. He is a member of the Neighborhood Watch Alliance.

He was portrayed by Timothy Dalton, who also played Neville Sinclair in The Rocketeer.

Simon Skinner is the manager of Somerfield, Sandford's supermarket. Due to the creepy hints he drops, Nicholas Angel believes that he is the murderer. Nicholas confronts him and accuses him of committing the murders to stop the construction of a bypass due to the possibility that a rivaling supermarket might be built there. Simon dismisses the theory, saying Nicholas has no evidence. Disappointed, Nicholas leaves. Fearing he knows too much, Simon sent over the trolley boy that works at his supermarket to kill Nicholas. Nicholas knocks out the trolley boy and and picks up the walkie-talkie he was holding. Impersonating the trolley boy, he is told to head over to the castle.

There, Nicholas learns the secret behind the murders. The NWA were the ones killing off anyone who endangered the chances of Sandford winning the title of Village of the Year. As the members chase Nicholas down, Danny appears and fakes stabbing him saving him from the mob. Nicholas later returns and defeats most of the NWA with the help of Danny and the rest of the police force. When Nicholas and the Sandford police enter the supermarket, Nicholas is attacked by the trolley boy. After knocking him out by shoving him into the freezer, Nicholas and Danny run into Skinner's office to see him getting into a police car with Danny's father Frank Butterman. Nicholas and Danny give chase in their police car. Skinner and Butterman see a swan on the road and swerve out of the way, crashing the car near a model replica of Sandford. Nicholas and Skinner start fighting in the model village. When Skinner rushes forward trying to stab Nicholas, he trips on a toy truck and impales his chin on the roof of the model church. He survives and is arrested by the London police. 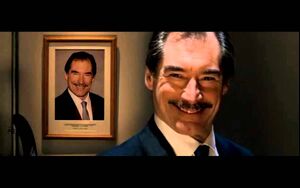 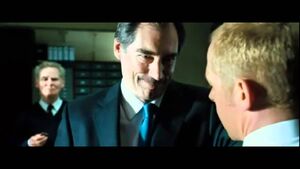 Skinner coincidentally arrives on the scene of Martin Blower and Eve Draper's murder. "What can I say? News travels fast!" 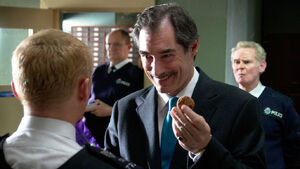 "...And that's the way the cookie crumbles! Thank you, Skinner!"

Simon Skinner and all his goons

Skinner armed with a yellow switchblade, about to kill Nick before he gets impaled on the model church
Add a photo to this gallery

Retrieved from "https://villains.fandom.com/wiki/Simon_Skinner?oldid=3767973"
Community content is available under CC-BY-SA unless otherwise noted.