Destroy all stores and businesses as revenge

Vengeful Propagandist
Simon Tucker is a one-shot villain from Totally Spies, who only appears in the episode "Malled".

He was voiced by Corey Burton, who also voiced Brainiac, Count Dooku, V.V Argost, and Malware.

Simon was once the fairly well off owner of his family's business in Dublin, Ireland. When Harrows Corp., his rival business company, drove him to bankruptcy, he was furious. So one day, he decided to create ACT (standing for Anti Consumerism Team), so he could destroy all businesses and stores around the world as revenge. He brings all stores from other countries to Australia and hypnotizes people with hypnotic earpieces (which are actually small radios), which turn them into mindless lackeys to create an ant-shopping army. When Alex and Clover get to Ireland, they find Sam with Simon and the other people he hypnotized. She is wearing blue war paint on her face, a green hat, and a white and green outfit consisting of a tank top and pants. When they look closer, the girls see she's wearing a radio, which they figure out is what hypnotized her. Simon tries to suffocate Alex and Clover by dumping boxes on them, while Sam stands there grinning. Simon then talks through his radio to communicate with the other people, and Sam leads them. Eventually, Clover and Alex manage to break the trance by destroying Sam's radio and throwing it in the water, where it short circuits and breaks. His fate is not revealed. 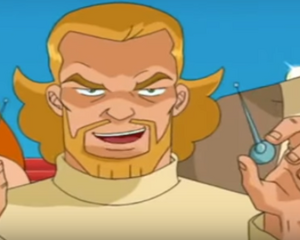 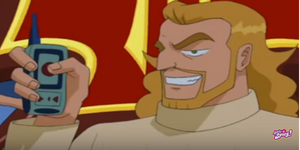 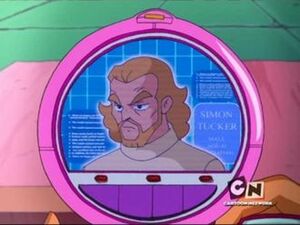 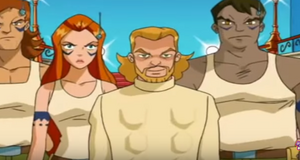 His radio
Add a photo to this gallery

Retrieved from "https://villains.fandom.com/wiki/Simon_Tucker?oldid=3891877"
Community content is available under CC-BY-SA unless otherwise noted.