Destroy and reshape the world.

Sinthea Shmidt, better known as Sin, Red Skull, and Mother Superior, in an antagonist in Marvel Comics. She is the daughter of the main Red Skull.

She was created by J.M. DeMatteis and Ron Frenz, and first appeared in Captain America # 290 in February 1984.

Seeking an heir, the Red Skull fathered a daughter with a washerwoman. The woman died in childbirth, and the Red Skull almost killed the child, angry that it was a girl. One of his followers, Susan Scarbo, convinced him not to, telling him she would raise the girl herself as her nanny. The Skull agreed and left the girl (now named Sinthia) to be raised by Scarbo, who indoctrinated her with the Skull's views as she grew up. The Skull returned when Sinthia was a child and put her in a machine that had her acceleratedly aged into adulthood and gave her superhuman powers.

As Mother Superior, Sinthia became the leader of a group called the "Sisters of Sin", young orphan girls who were accelerated into adulthood and given psionic powers by the Skull after being indoctrinated by Sinthia. The Sisters of Sin would have many run-ins with the Red Skull's nemesis Captain America before being de-aged when they entered a chamber designed to reverse the Skull's aging process to assault Captain America - who had suffered through the Skull's process and had become elderly - while he was using it to return himself to normal, and they were reverted to children at the same time Captain America was restored (she would later claim she was deaged to the wrong age - but whether this is true, and in which direction, is unclear).

Later, Sinthia's nanny, Susan Scarbo (now calling herself Mother Night), reformed the Sisters of Sin and became their new leader, while the deaged Sinthia herself took the name Sister Sin.

She was later captured by S.H.I.E.L.D. and taken to their reeducation facility, where they attempted to reprogram her to be a "normal" American girl and gave her false memories to that effect. Later, the Red Skull was assassinated by the Winter Soldier under the orders of Aleksander Lukin, and one of the Skull's henchmen, Crossbones, broke into the facility, kidnapped Synthia, and tortured her to break S.H.I.E.L.D's conditioning. After he succeeded, she entered into a relationship with him, and - with Synthia now calling herself simply Sin - the two went on a killing spree. They later reunited with the Skull, now living inside the mind of General Lukin.

As the first part of the Skull's Master Plan, Sin disguised herself as a nurse after the Civil War while Crossbones sniped Captain America at the courthouse, even though it meant obeying her father and abandoning Crossbones to his fate. Sin then revealed to Sharon Carter that Carter was the one who had killed Cap.

Now the leader of a new incarnation of the Serpent Squad, Sin breaks Crossbones out of jail. He is later apprehended again, and Sin wounded, in an attempt to break into the Capitol Building. Sin is later sent to assassinate the Democratic and Republican presidential candidates, but is stopped by the new Captain America. In the aftermath of Captain America: Reborn, after attempting to put her father in Steve Rogers' body, she is injured by the explosion of her father's mechanical body and her face is hideously scarred like her father's, making her the new Red Skull. She is later visited in prison by Baron Zemo for information about Bucky.

Sometime later, Master Man sprung Sin from prison, prompting Sin to take her place as the new Red Skull. She delivers a video to the media recorded three months before the trial of Bucky where he declares that he wasn't brainwashed but was an accomplice and fully aware of his actions. She along with Master Man are later seen on Ellis Island where she pretends to blow up the Statue of Liberty with Falcon and Black Widow in it, unless Bucky is delivered to her.

During the Fear Itself storyline, Sin (with the help of Baron Zemo) unearths the Hammer of Skadi and becomes Skadi in order to free Serpent: God of Fear from his underwater prison.

Sin vows to do what her father failed to do in taking over the world. She succeeds in her mission in freeing Serpent and then she prepares an army of Nazis to take over the D.C. Capital. During the fight, Bucky (the new Captain America), Falcon, and Black Widow tried to fight her, but she was too powerful.

Although they were obviously outmatched, they choose to fight her off anyway, thinking that it would be more heroic to die in battle than to retreat like cowards. The fight ended with her killing Bucky Barnes.

As Mother Superior, Sin possessed a range of superhuman powers including telepathy, telekinesis, teleportation and intangibility. After she was de-aged, she apparently lost these powers completely - unlike the other "Sisters of Sin", whose powers were diminished but not eliminated upon de-aging. The reason for this discrepancy has never been revealed.

Being trained by her father, she is an expert hand to hand combatant and martial artist. She is also highly proficient in firearms and explosives. As the Red Skull's child, Sin also has a high level of intellect.

In the 1990 low budget film Captain America, Sin is portrayed by actress Francesca Neri. She is both the Red Skull's daughter and second in command, but is Italian instead of German, with her name changed to Valentina de Santis to reflect this.

Sin will appear as the main antagonist in the unnamed forth Captain America film of Marvel Cinematic Universe. 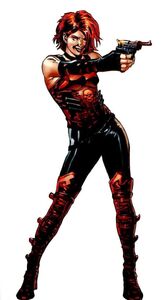 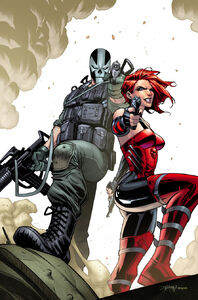 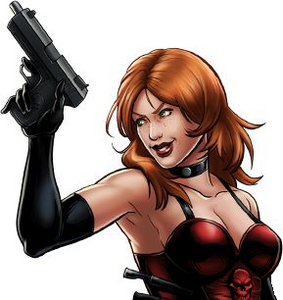 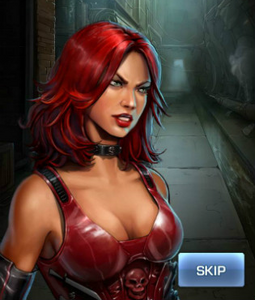 Sin in Captain America: The Winter Soldier - The Official Game.