Sinduramon is an Exalted Beast Digimon whose name is derived from the mythological Kinnara. It is the "Rooster" Deva, and serves the Sovereign Baihumon. As a follower of Baihumon, it likes to quarrel and gossip above all else. With its provocative attitude, it will pick a fight with its opponent one way or another, but when they move to attack, it immediately draws its head and wings within its spherical armor. Its armor is the hardest among all of the Deva's equipment, and once it gets inside of the armor, it is absolutely protected. When it rolls around in that state during battle, it is occasionally possible to cut through the breach. Just like Kumbhiramon, it carries the Treasure Pestle on its back. In the anime, he can only say, "Positron Pulse!"

He was voiced by Michael Reisz.

Sinduramon appeared in Digimon Tamers as a Deva who (like the others) worked for Zhuqiaomon (as opposed to other profiles in which he serves Baihumon). He is the third Deva to appear and the third to be destroyed. Takato, Guilmon, Henry, Terriermon, and Calumon encountered Sinduramon while on a camping field trip. Initially, he was very small, so the tamers did not think him to be a threat. But he absorbed the nearby city's electricity, causing him to grow to Growlmon's size. He also possessed an owl who spoke for him. Takato and Henry noticed the blackout caused by Sinduramon, and chased him to the dam, where Guilmon and Terriermon digivolved to Growlmon and Gargomon in order to fight him. Sinduramon met his demise when Growlmon's Pyro Blaster knocked him into the water, destroying him with the very electricity he had absorbed. After Sinduramon was destroyed, the possessed owl turned back to normal and flew away.

This Ultimate-leveled Digimon resembles a bird and is just one of the twelve "Deva Digimon". He fights for and follows the Four Holy Beast member, Baihumon, and is the one who is most liked out of the other three followers. He has a provocative attitude and picks fights against his opponents in many ways possible, but if the opponent turns extremely belligerent and aggressive, his head and wings are withdrawn into his spherical armor immediately. He is the most defensive of the Devas because his armor is the hardest out of all those who do wear armor. When battling the opponent, he will always find a chance to break through the foe's attack pattern. His special attack is "Puyavaha", which releases a powerful electric shock from the Treasure Pestle he wields, the same Treasure Pestle that can be found on Kumbhiramon. 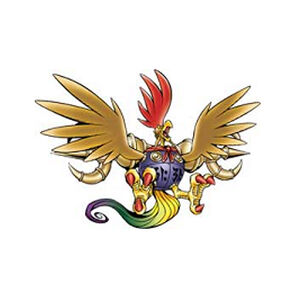 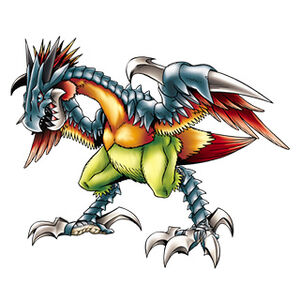