Leader of the Sinestro Corps

Member of One Earth Regime

Help Superman rule the world.
Continue to instill fear into the land under the control of the One Earth Regime (both Failed).

He is the leader of the Sinestro Corps, who joined Superman's One-Earth Government regime and assist Superman in many of his plans, including fending off the Green Lantern's invasion and killing most of them. He is also the one responsible for the resignation of Hal Jordan towards the power of the Green Lantern so that he accepts the ring of fear and becomes in Yellow Lantern.

He was played by Troy Baker.

Thaal Sinestro was born on the planet Korugar. He was at some point inducted into the ranks of the Green Lantern Corps and was one of the most respected members of it. However, when Hal Jordan became the newest and greatest Green Lantern Sinestro would start defying orders eventually causing him to be exiled from the Green Lantern corps. He would eventually become the leader of the Sinestro Corps of fear.

Injustice: Gods Among Us comic series

During the events of the comics, Sinestro would join Superman's regime (being the only supervillain to join willingly). He would assist Superman in many of his plans, including fending off the Green Lantern's invasion and killing most of them. He would also get Hal Jordan to join his side by killing John Stewart and framing Guy Gardener for it. In year three he also tortures Officer Sprague.

Sinestro first appears in Green Lantern's chapter fighting Main Universe Wonder Women and Green Arrow. He almost kills Green Arrow but is stopped by the Main Universe Hal Jordan. He tells Hal Jordan that he joined with the regime due to it being similar to his own government on Korugar and is willing to tolerate humans as well as reveals that the Injustice Hal Jordan has joined his side. He is beaten by the main universe Hal Jordan. He is not seen again until the battle on Stryker's Island, where he is among the many fighting the insurgency members.

After the battle, Superman decides to destroy Metropolis and Gotham to set an example, as well as among the many who witnesses Shazam's death at the hands of Superman not seeming to care that much. Superman orders Sinestro to prepare his troops. Sinestro is next seen before the Regime soldiers, declaring their mission and preparing to publicly execute a group of renegade soldiers who defied Superman's orders. The Flash (who just defected from the regime) shows up and battles Sinestro who losses to him.

Sinestro takes part in the attack on Gotham he beats the main universe Hal Jordan this time and it looks like his army is winning. Until Superman shows up after Superman beats Black Adam Sintestro attacks Superman and thinks he killed him. Superman survived however and Sinestro tries to fight him, but Superman easily stops him and takes off his ring.

In the epilogue, Sinestro is shown being taken to the guardians of the universe to stand trial for his many crimes, not happy about this.

Sinestro makes his first appearance after Hal Jordan's trip to Harring, where he is immediately beaten by Hal for all the years of deceit and manipulation. After which, Sinestro is placed into solitary confinement under Soranik, who questions him over her mother's demise. Though Sinestro reaffirms she was assassinated, Soranik sternly reminds him that the clues do not add up and that Arin Sur likely committed suicide. Sinestro then attempts to seize his daughter's power ring while her back is turned but ends up being smashed in Jordan's cell instead.

Before any further action is taken, Atrocitus's Red Lanterns arrive to capture Sinestro. Saving his daughter from one of their blasts, Sinestro attempts to grab one of the Red Power Rings to fight, only for Hal to wear it instead. Outnumbered, the Green Lanterns in the area withdraw, with Sinestro being taken to Oa. At Oa, Sinestro is questioned over Atrocitus's identity, and he informs the Lanterns that he had fought Atrocitus many times before and after he left the Green Lantern Corps.

Thanks to Starro, the Red Lanterns breach Oa's power battery, forcing the Guardians to give Hal a Power Ring to try and rescue Sayd and the other lanterns that were possessed by Starro. Sinestro, wishing to save his daughter, also asks for a Power ring, which Hal convinces the other Green Lanterns and the Guardians to do. Aiding the rescue of the other Lanterns, Sinestro refuses to harm his daughter when he confronts her. Impaled at the chest, Sinestro uses his last burst of strength to remove Soranik's spore, freeing her from Starro's control.

In his last words, Sinestro apologizes to Soranik for not being a better man for her mother and confirms that, while he never wished her any harm, Arin still killed herself. After which, his ring falls into Soranik's hand, recognizing her as his replacement for the sector. Sinestro is then mourned by Jordan and the other Green Lanterns.

Sinestro is often hailed as the "Greatest Lantern of All", possessing the willpower and ability to wield any ring of power to devastating effect, making him one of the most powerful ring bearers ever seen. . Although he was once a user of the green light of willpower, after his expulsion from the Green Lantern Corps, Sinestro harnessed the yellow light of fear and has mastered the power of fear for himself. Like a Green Lantern ring, a yellow Qwardian ring is capable of creating any construction formed by the yellow light of fear, limited only by the wearer's imagination. He is also granted the same natural benefits, including a barrier around the wearer's body, flight, travel at the speed of light, superhuman strength, and the ability to survive and speak in space.

Sinestro's builds are more alien in design and reflect his dominant personality, while being more powerful than an average Green Lantern. Sinestro primarily creates energy explosives, ranging from small orbs to creating small meteorites for increased damage. Sinestro favors bladed construction weapons, ranging from swords to an ax for direct attacks, and along with playing on the fear of his enemies, Sinestro will often create constructions in the form of spider limbs to emerge from his back to impale them, with said limbs even acting as projectiles. Sinestro also uses shackles and other binding constructs to restrict his opponent's movements, leaving them exposed for attack. Sinestro's control over his buildings is so precise that he is capable of creating portals to teleport, a feat most other power ring bearers consider impossible. 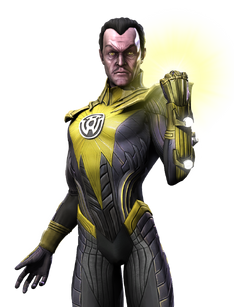 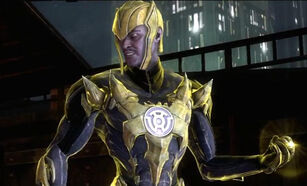 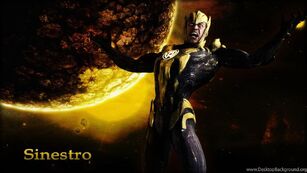 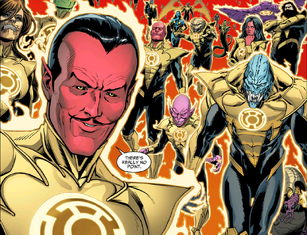 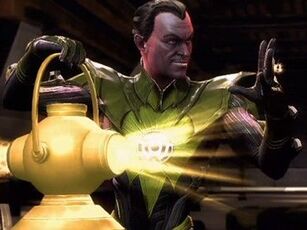 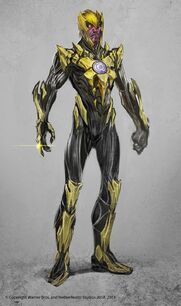