Help Man Ray in his plans

Animalistic Supervillain
Sinister Slug is a minor antagonist in Spongebob SquarePants. He is one of the many foes of Mermaid Man and Barnacle Boy, and is a terrorous slime creature that lives in the sewers.

In "The Bad Guy Club for Villains", Sinister Slug crawled out of the sewer and wormed up to a gathering of other villains. These were Man Ray, the Dirty Bubble, Atomic Flounder, and Jumbo Shrimp. They were banding together to make a team, known only as BGATFBC. Mermaid Man and Barnacle Boy watched them from an alley and suspected something was up so they tried to stop them.

The BGATFBC held their meeting at Hotel Evil, where Mermaid Man and Barnacle Boy showed up on the scene with a few other superheroes and fought with them. In battle, Sinister Slug slid up the wall and vomited a ball of slime at Mermaid Man. Mermaid Man jumped out of the way and the slimeball blasted Atomic Flounder instead. The slimeball was so sticky that it immobilized Atomic Flounder and stuck him to the ground.

Mermaid Man used The Bronze Hairnet's hairnet to capture all of the BGATFBC members and make them talk. They said that "BGATFBC" stood for "Bad Guys All Together For Book Club" and that they couldn't imprison them for reading. Mermaid Man said that this was right and let them continue their book club. 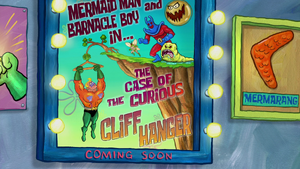