Master of the Mystic Arts

Reminiscing about his time with Christine Palmer.

Travel across the multiverse to find a reality for him to dreamwalk into his alternate self for him and Christine to be together (failed).
Kill alternate versions of himself (succeeded to an extent).
Kill Earth-19999's Doctor Strange to have Earth-838's Christine (failed).

Doctor Stephen Vincent Strange, also known as Sinister Strange, is a minor antagonist in the 2022 Marvel Cinematic Universe film Doctor Strange in the Multiverse of Madness. He is a variant of Earth-19999's Doctor Strange, who was unable to live a life without his love, Christine Palmer.

Having lost Christine Palmer from his world, he began using the Darkhold to travel across the multiverse and kill variants of himself that lived happily with their Christine. The usage of the Darkhold ultimately corrupted him and caused him to plunge his world into pure chaos. He meets with his heroic counterpart after Strange gets banished to his incursion-stricken universe by the Scarlet Witch.

Like his original version, he was portrayed by Benedict Cumberbatch, who also played Dormammu in the previous film and Strange Supreme in What If...?, Smaug and Sauron in The Hobbit film trilogy, Khan Noonien Singh in Star Trek Into Darkness, William Ford in 12 Years a Slave, Shere Khan in Mowgli: Legend of the Jungle and The Grinch in the 2018 film of the same name.

Sinister Strange maintained some if not most of Earth-19999's Doctor Strange's personality and characteristics. He is arrogant, egotistical and somewhat cynical towards life, believing that any life is worth sacrificing for the greater good. It is presumed that he also maintained his good characteristics such as his nobility and willingness to learn and help others in need like how both Doctor Strange and Defender Strange aided America Chavez to prevent her powers from being stolen.

However, much like most of his other alternate-selves, he has an intense love for Christine Palmer which leads him to a dark path as he was initially a grief-stricken man who seeks the love of his life and would do anything to achieve it, hence, turning to the Darkhold. Once he was corrupted, most of his good characteristics are buried beneath his more sinister personality. He develops a form of self-loathing which leads to utter bitterness and vengefulness which prompted him to kill every version of himself he could find out of anger for not being able to be together with Christine, however, he would develop sheer sadism for his actions as he would proudly tell Doctor Strange about his actions with glee and no remorse whatsoever.

His love for Christine eventually warped into an obsession which only fueled the influence the Darkhold has on him. Lastly, Sinister Strange also possesses a dark sense of humor, evident when he told Strange about killing his alternate selves, he also is incredibly unhinged and sadistic as nearly every version of Strange has a calm and sophisticated demeanor, his demeanor is of malice and constantly on-edge. It is implied that Sinister Strange did initially feel remorse for his actions and tried to correct them but his continuous failures drove him further mad and more vulnerable to the corruption of the Darkhold up to the point where no longer feels remorse.

Much like his Earth-19999's counterpart, he lost his little sister Donna as a child after she drowned in a frozen lake but never spoke of the tragedy to anyone since. He would go on to become a world-renowned surgeon and would go on to live his life almost exactly as his Earth-19999's counterpart such as falling in love with Christine Palmer, losing the use of his hands, becoming a sorcerer and battling Thanos alongside the Avengers in 2018 and in 2024.

In 2025, Strange discovers that Christine had survived the snap and becomes depressed and saddened over her marriage to another man whom she met and fell for before the Blip occurred. Not being able to move on, he brings it upon himself to travel through the multiverse to find another version of Christine for him to be with. By unknown means, he manages to find and study the spells and contents of the Darkhold and uses it to "dreamwalk" into the bodies of his alternate selves, possessing them.

Despite his attempts, he fails to be with Christine in every universe he dream walks into due to his unstable nature, causing him to gradually lose his sanity and becomes further corrupted by the Darkhold and due to the seething hatred he has for himself for failing to be with Christine, he kills almost every alternate version of himself he could find that are happy with Christine out of jealousy and bitterness. This causes an incursion between his universe and another, plunging both universes into chaos and ruins, leaving it in a state of post-incursion. Despite his attempts, he is unable to undo his actions so he secludes himself in the New York Sanctum in despair.

After being banished by Scarlet Witch from Earth-838 into America Chavez's Star portal, Doctor Strange and Earth-838's Christine finds themselves in New York City in Sinister Strange's universe where everything is in ruins and degrading due to post-incursion. Needing help, they head over to the New York Sanctum which is in disarray and under a spell as Sinister Strange glares at them from his chamber window. Strange enters the sanctum and climbs the stairs to his chamber only to be greeted by Sinister Strange who manipulates him into thinking that he is unaware of who he is. Sinister Strange begins to presents himself as someone who had lost a battle leading to his universe's destruction.

However, Strange notices the dark magic Sinister Strange is using and realizes that he possesses a Darkhold. He pleads with Sinister Strange to help him save Chavez and stop Wanda however, he slowly reveals his true colors to Strange and explains in detail about how his love for Christine led him to commit atrocities such as killing their other alternate selves and being solely responsible for his universe's state. He would then attempt to make a deal with Strange to hand him over Earth-838's Christine in exchange for the Darkhold to which he refuses.

Realizing that he is corrupted by the Darkhold, he engages Sinister Strange in battle who wishes to kill him to forcefully keep Christine for himself. However, Strange eventually gets the upper hand and sends Sinister Strange flying out of his chamber window where he falls to his death, getting impaled by his own fence as Christine watches in horror. 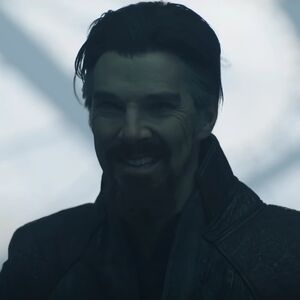 "Things just got out of hand." 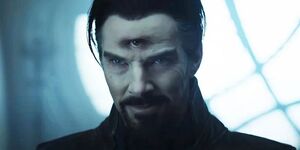 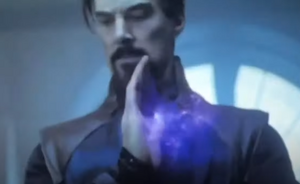 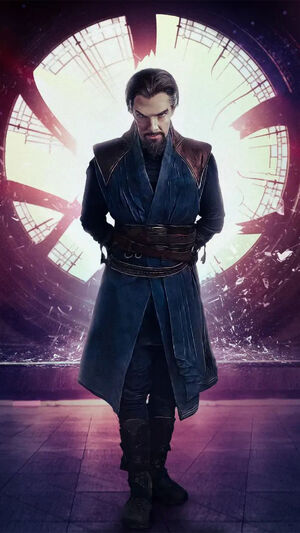