Sinobu of the Dead Return Ball

Sinobu is a normal kid who was captured by Gustav for his evil plans. Sinobu is very shy and doesn't want to talk so much. He once was very happy with his sister, but his personality changed to what it is now because of the experiments he suffered by Gustav. While possessed by Goenitz's spirit, Sinobu loses his mind, entering a state similar to the Riot of the Blood.

Sinobu is kidnapped by the European millionaire Gustav Munchausen, who plans to channel the spirit of Goenitz through him.

Goenitz was dead before Orochi was resurrected then sealed once again and his spirit was free. When the final teams reach to final, Goenitz tries to awake again on his body, but he lost his mind.

After he is defeated in the first battle against him, in the next battle he will fight but with electricity-based attacks instead of wind-based attacks. 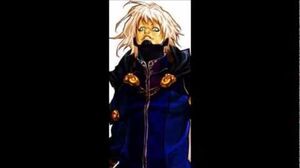