Raxacoricofallapatorian, Member of the Slitheen Family

Alien
Sip Fel-Fotch Passameer-Day Slitheen is a member of the Slitheen a criminal family from Raxacoricofallapatorius and a minor antagonist in the Doctor Who episodes Aliens of London and World War Three.

He along with Jocrassa, Blon and several other members of the Passameer-Day branch of the family came to Earth in 2006 with plans to start World War Three which would turn Earth into molten slag which would then be sold as cheap fuel for spaceships. Whilst on Earth, Sip disguised himself as a police officer named Strickland and was sent out to kill Jackie Tyler but she was able to escape.

Later Sip appeared at the home of Mickey Smith and tried to kill both Jackie and Mickey there. Through as Sip was breaking through the front door Mickey contacted The Ninth Doctor who after discovering that the Slitheen come from Raxacoricofallapatorius, asks Mickey if he has got any vinegar which is deadly to the aliens as they are calcium-based life forms. Jackie goes into a cupboard in Mickey's kitchen and pours all of the food with vinegar in it into a jug. Just then, Sip breaks down the kitchen door and prepared to kill Jackie and Mickey. Jackie then threw the contents of the jug onto Sip, causing him to explode.

Later, Jocrassa is informed by his brother (who posed as General Asquith) of Sip's death, to which Jocrassa says that he knew of the death as he felt it. 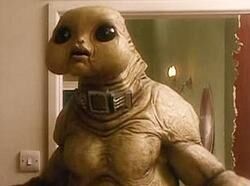 Sip after Jackie throws vinegar products on him.