The Devil
The Beast

Kill his own son Lawrence Talbot at all costs. (indirectly succeeded)

Endlessly use his werewolf power for his own needs in order to kill anyone as he can (failed).

Sir Johnathan "John" Talbot is the main antagonist of the 2010 remake of the groundbreaking 1941 horror classic The Wolf Man.

He was portrayed by Anthony Hopkins, who also played Hannibal Lecter in Silence of the Lambs, Hannibal, and Red Dragon,, Ted Crawford in Fracture and Edward Bailey in Red 2.

During a hunting expedition, Sir John was led into a cave where the Feral Boy attacked and bit him. He dismissed the bite as a mere wound, but one month after the bite when he returned home, he transformed into a werewolf and murdered his wife Solana in front of his son Lawrence Talbot (the protagonist of the film)-as well as a farmer, Quinn Noddy, and his livestock. Sir John had Lawrence locked away at an asylum where he was mentally and physically tortured. He had his servant, Singh, lock him up every full moon night after that. Despite admitting to having considered suicide, he ultimately embraced his inner beast.

25 years later, one night, after having a drunken argument with his other son Ben Talbot, regarding his fiancee Gwen, Singh tried to sedate him but was knocked unconscious. Because of knocking Singh out, Sir John was unable to lock himself up. That night, Sir John transformed into a werewolf and killed Ben, as well as three other men. Upon transforming back, he threw his son's body in a ditch to cover his tracks.

Lawrence returns to Blackmoor for his brother's funeral and decides to help investigate Ben's death. He visits a gypsy camp where a lynch mob was accusing the gypsies of being responsible. Sir John, as a werewolf, attacks and bites Lawrence after killing several gypsies and members of the lynch mob alike, leading up to the events when Lawrence went on a bloody rampage one month later.

The next day, Sir John encounters the now human Lawrence and, realizing that Lawrence is now a werewolf, sends him back to the same Asylum as years before. During this time Sir John succumbs to the power of the werewolf, kills Singh and focuses on controlling his power for his own needs. Sir John visits the Asylum revealing he's behind everything and tries to force his son Lawrence into joining him, but Lawrence refuses.

Lawrence would later escape the Asylum and confront his father back in their mansion. Lawrence finds Singh's gun with silver bullets. He attempts to shoot his father, only to learn the powder was taken from the bullets years before and as the full moon arises, they both turn into werewolves and start attacking each other. At first, Sir John proves to be the powerful of the two monsters, but Lawrence would gain the upper hand by kicking his evil father into the fireplace, where he starts to move around roaring in pain caused by the flames. At that point, Lawrence kills his father by slashing him in the stomach like he did to his brother Ben and then by decapitating him as revenge for killing his mother and brother and cursing him.

Unlike his 1941 counterpart, Sir John Talbot is very evil and irredeemable. At first sight, he is suave and charismatic, although a bit rude but after all loving, given the fact that he refuses Lawrence to be taken by the angry crowd by shooting them. But this is just a facade and he does not genuinely care about his son, leaving him to be dragged off to an asylum and accusing him to be the one responsible for all the deeds in Blackmoor, knowing full well he is the true culprit and that Lawrence is going to be tortured.

Once a seemingly honorable soldier, his accidental lycanthropy has absorbed all of the rest of his sanity and after being remorseful for the inadvertent murder of his wife and contemplating suicide, he decides fully to embrace the beast, knowing full well what he would imply. This proves that he is nothing more than a psychopathic, sadistic and bloodthirsty man who enjoys carnage.

Unlike Lawrence's werewolf who acts a lot more like a frightened animal and only really attacks when backed into a corner or provoked, Sir John's werewolf was far more of a straight up murderer, intentionally going after it's victims. 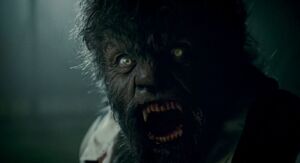 Sir John after he killed his wife. 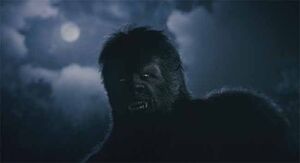 John as he kills his son, Ben Talbot 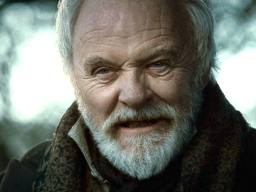 Sir John watches as Lawrence is arrested by Inspector Abberline. 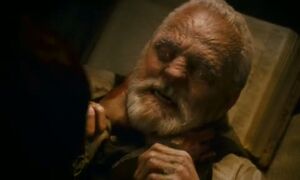 Talbot transforming into a werewolf. 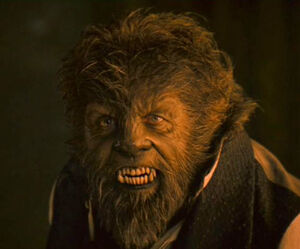 A transformed Sir John about to attack Lawrence. 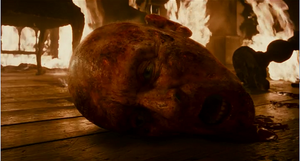 Sir John Talbot's final moments and meets his demise after being decapitated by his son, Lawrence Talbot.