Knight Commander of the Order

To gain for his people the right to live and to ensure the survival of the half-breeds.

Sir Lucan is the main antagonist of The Order 1886. While being the Knight Commander of the Order he is also a half-breed and works with Lord Hastings. However, while Lord Hastings goals are evil, Lucan merely wants for his kind to live. He does not hate Sir Galahad, the protagonist of the game and dislikes the thought of killing him. Lucan is the adopted son of the Lord Chancellor of the Order.

When he was a baby, Alastairs family was killed by the Order because they were half-breeds. The Lord Chancellor personally killed his father but was not able to kill an innocent child. He adopted Alastair and hid the fact that the boy was a Lycan. Later, Alastair joined the order under the name of Sir Lucan.

After a meeting of the order, Galahad hears a discussion of Lucan, Lord Hastings and another lord. Lucan says, that he will attend the launch of the airship Agamemnon which will transport Lord Hastings and cargo of the United India Company to America. They are interrupted by Sir Percival, who wants to convinve Lucan that a investigation at Whitechapel is neccessary if they want to stop the rebels. Although the Lord Chancellor forbade it Lucan gives Percival his blessing, under the condition that Percival takes the blame if the plan fails. He also tells Galahad to look for his sister Igraine.

At Whitechapel, Sir Galahad finds evidence for an attempt on the life of Lord Hastings. To save Hastings, Galahad, Percival, Lafayette and Igraine board the Agamemnon. As Lucan was ordered to escort Hastings until the ship reached the british borders, he is also aboard. When the rebels try to kill Hastings they are ambushed by Galahad and Lucan manages to get Hastings out safely. When the ship is evacuated because of a bomb, Lucan argues with Perceval, as their mission at Whitechapel has not stayed secret. He also tells Perceval that he now can do little to save him from the wrath of the Lord Chancellor. He then accompanies Lord Hastings and leaves the ship on a rescue boat, leading the evacuation. After the Agamemnon crashes, Lucan is one of the knights to search the wreckage for survivors.

Before the initiation of Lafayette to the order, he tries to talk to Galahad who wants revenge for the death of his mentor Sir Perceval but to no avail. When the Lord Chancellor says that Percevals death was the result of his insubordination Lucan tries to silence his father but again fails. When Lord Hasting's carriage is ambushed by the rebels he is among the knights who battle the rebels, giving the command to Galahad. When Hastings is pulled out of his carriage, Lucan leads him back to the palace.

As he needs evidence for the crimes of Hastings and the United India Company Galahad plans to break into the United India House, the headquarter of the company. He asks Lucan to come with him because Lucan knows the grounds and will be able to persuade the Lord Chancellor if evidence is found. Lucan agrees but tells Galahad that more than two people are needed. When he discoveres that Galahad brought the rebel leader Lakshmi he gets angry but Galahad is able to convince both sides to work together.

In the archives of the company they split up to search for proof. Galahad and Lakshmi find Lord Hastings who turns out to be "Jack the Ripper" and a vampire. Lucan arrives and shows his true colours: He was an accomplice of Hastings all the time. When fighting erupts. Lakshmi is able to flee but Lucan and Galahad fight each other across the mansion. Lucan manages to wreste Galahad to the floor but when he hears knights of the Order arriving he flees. Hasting blames Galahad for conspiring with the rebels to kill him and Galahad is arrested. When Galahad later escapes, Lucan is among the knights who try to recapture him on the roof of the Palace.

Galahad manages to escape with the help of the engineer Tesla. As he fears that Lucan may hurt the engineer when he finds out, Galahad sneaks into the headquarter of the Order. While communicating with Tesla via microphone, he hears Lucan arrive. When Galahad arrives in Teslas laboratory, he finds the egineer beaten but alive. Tesla tells him that Lucan is still inside, so Galahad enters the room. Lucan talks to him out of the shadow and says that he only did what was best for his kind and that he fought for their right to live. He than attacks Galahad and wrestles the gun from him. However, he doesn't shoot Galahad but throws the gun away and pulls out his knife. They fight each other. During the fight Lucan turns into a Lycan and wounds Galahad multiple times. The fight ends with Lucan, who is stabbed multiple times, turning back human.

Galahad stands over him and asks him why he has done all the things and how his father and Igraine would react. At this moment, Lucans father enters the room. He asks his son for forgiveness and says that he never wanted such a life for Lucan. Galahad, shocked that the Lord Chancellor knew all along, begs him to confess before the council but the Lord Chancellor replies that the order must stand strong and united and that such a confession would shake the unity of the order. He also states that he can never kill his own son so he hands his pistol to Galahad. To ensure that Galahad can not tell any of the knights he strips him of his ranks and banishes him. He then stands up and leaves the room leaving his son and Galahad behind. Lucan exhausted accepts his fate and lets himself be shot by Galahad .

Lucan with his sister Igraine

Lucan with Hastings aboard the Agamemnon 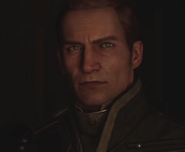 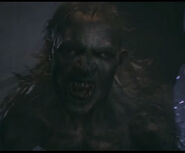 Lucan's death
Add a photo to this gallery
Retrieved from "https://villains.fandom.com/wiki/Sir_Lucan?oldid=3708863"
Community content is available under CC-BY-SA unless otherwise noted.