To mock Finn for having no armor (failed)
.

Help Gumbald go to war with the Candy Kingdom (currently).

Incompetent Dark Knight
Sir Slicer is an antagonist from Adventure Time who appears in "Blood Under the Skin".

He is voiced by Peter Stormare, who also played Abram Tarasov in John Wick: Chapter 2, Gaear Grimsrud in Fargo, Werner Zytle in Arrow, Torsten in False Trail, Lucifer Morningstar in Constantine, Dino Velvet in 8mm, Ghost in 22 Jump Street and Dracula in The Batman vs. Dracula.

Sir Slicer appears when some knights start laughing at Finn because of his thimble. Sir Slicer mocks Finn for having no armor then continues mocking him throughout his whole journey to get the Armor of Zeldron. First, he calls Finn "Crimsons Checks" after Finn got shocked and embarrassed from seeing several naked people showering in the Swamps of Sadness. Then he makes a barb sing an embarrassing song about Finn after a Red-Faced Monsters mistakes him for her baby. He claims grandfathers will sing the song to their grandchildren for generations which Finn debunks. The Red-Faced Monster tries to attack him in retaliation but is blocked off by hiss armor, he then grabs the barb and leaves on his horse.

In the end of the episode, Sir Slicer still mocks Finn because he still has no armor then he mocks Jake for being dressed like a lady. However, Finn mocks Sir Slicer for wasting his time following him and challenges him to a fight. But, when he tries to move he falls off his horse due to his heavy armor. He tries to get back up with the use of a stick but get a splinter just by touching it. Finn then trows a thimble at him then leaves him on the ground.

In "Gumbaldia", he is one of the many villains teaming up with Gumbald to go to war with the Candy Kingdom.

In "Come Along With Me", he witnesses the arrival of GOLB then runs away along with the rest of Gumbald's army after Aunt Lolly asks for help to fight GOLB. 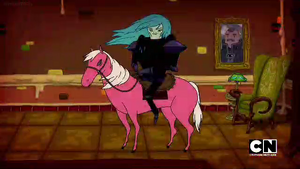