Luring sailors to their deaths with their beautiful voices

A Siren is a type of sea-spirit from Greek mythology akin to the mermaid. However, unlike the relatively harmless merfolk, sirens were often depicted as deadly temptresses who would lure sailors towards rocky shores via their hypnotic singing, causing the sailors to crash into the rocks and meet with a watery demise.

The reasoning behind the Sirens' actions were never truly explained though in Greek mythology (like many mythologies) the supernatural world often had little explanation and the spirits and gods could torment mortals as they saw fit, though it's very.likely that they are man eaters. Sirens were not gods, but they were sometimes said to be related to the great sea-god known as Poseidon.

Sirens have been depicted in several forms over the centuries, sometimes they are seen as women with birdlike features similar to the Harpies and other times they are depicted as attractive mermaids. No matter their appearance, Sirens always share the quality of a haunting singing voice that is irresistible to mortals. It is said that once a sailor heard the Sirens' song he was doomed to follow it, suggesting it was extremely powerful.

The sirens are mentioned in two famous Greek Epics. In The Odyssey, Odysseus devised a clever plan to overcome the spirits, he had his men plug their ears with wax then tied himself to the ship mast as they sailed through the Sirens' territory. His crewmates were thus able to navigate safely. however, Odysseus was afflicted by the Sirens' call and demanded to be set free to join them. Luckily for him, his crew knew better and ignored his demands and once the Sirens' song faded from earshot Odysseus began to regain his sanity again.

In Jason and the Argonauts, Jason ordered Orpheus, the great musician, to play his lyre so beautifully that the song of the Sirens would have no power over the crew. They made it safely past thanks to Orpheus. 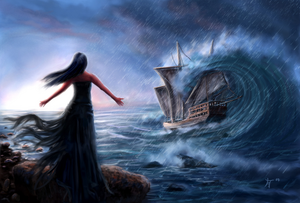 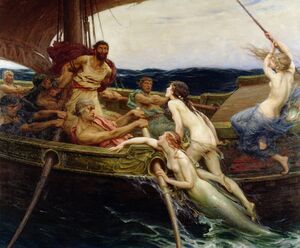 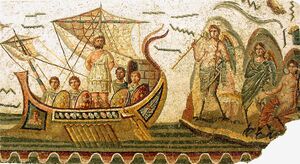 Sirens as depicted in Roman art. 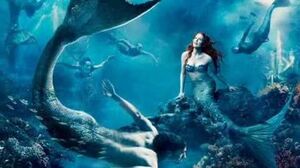