Cherishing her encounter with the mighty Amon.

Wipe out humanity (both failed).

Sirene is a major antagonist in the Devilman franchise, a female demon of immense physical power who harbors an ardent hatred towards Akira Fudo. She was Amon's lover, but is distraught to find him possessed by Akira Fudo.

In manga named Amon: Apocalypse of Devilman, it is revealed that her name is given to her by her tribe called Sirene. Her mother who gave birth to her (and entrusted her to Kaim), is actually Sirene the First, making this Sirene the Second.

Sirene resembles a curvaceous nude woman standing at a height of over three meters tall with white feathers for a bikini bottom and covering her head, except for her face which is framed by them. The top feathers fall-over her forehead in a widow's peak. Sirene's most notable feature is the large pair of bird wings protruding from her head which enable her to fly. Sirene's forehead has two yellow antenna sticking out. Her face has sharp features, such as a pointed nose that resembles a beak and razor-filled teeth. She also has yellow bird claws for hands and feet.

In Devilman: The Demon Bird she makes her appearance almost half way in (despite the fact that she is in the title). She attacks Miki Makimura's house to kill Akira Fudo and sends Gelmer and another demon to distract Akira. After Akira kills them, She busts in and grabs Akira in her bird foot. Akira tries to transform but her claws prevent it. As she tells Akira of the horrors he will face, Ryo Asuka shoots her below the left breast with his shotgun and she drops Akira when she fires off her arm to nail Ryo. Akira transforms and they fight for a long time until she summons her arm and chops up Akira by spinning it rapidly.

After losing an arm and getting sliced across the torso, he grabs her antenna with his long head things and jumps as the spin-fist is behind him. Sirene is stabbed through the gut with her own arm. Then, Akira rips off her left head wing and she asks Zenon for help. He responds by sending demons to fight Akira and Kaim. Kaim says she is beautiful even all ripped up and bleeding and merges with her despite the fact that her wounds may kill them after ripping off his head. After Akira kills the other demons, Sirene/Kaim comes barreling through the forest and zaps him with her lightning. Barriling into him at full force she penetrates Akira and nails him with a long hard horn. Devilman pulls himself free and is thrown clear, his energy draining and his his blood gushing out of his wounds. Convinced that that Devilman is as good as dead and feeling at peace, Sirene then dies from the wounds Akira inflicted on her earlier.

She also has teleportation abilities and her hands can fire off like Mazinger Z while being controlled with her antenna. She has a head beam in the Chibi world. In the anime, she can read minds with her antennas. 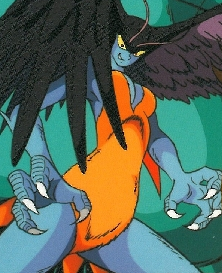 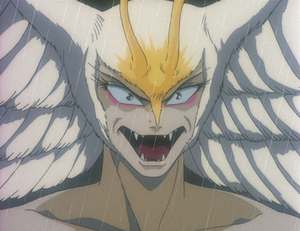 Sirene in the OVA. 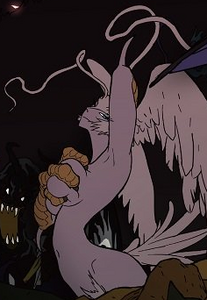 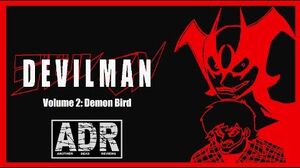 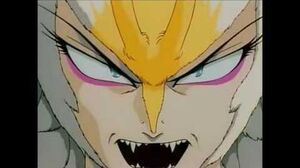 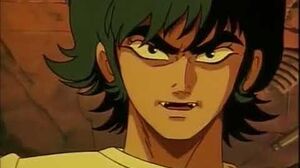