The Sirens are minor antagonists of Ice Age: Continental Drift. They are fish-like carnivorous animals with needle-sharp teeth that resided near an island. They are based on the sirens of Greek mythology, which were legendary sea nymphs depicted to lure sailors to their deaths through their enchanting voices (in this case, their voices when impersonating someone sound like the being they're impersonating, albeit sounding autotuned). In the film, they trick the heroes and the film's main antagonist, Captain Gutt.

Sirens are sea creatures that are hungry for flesh. They usually lie on long rock outcroppings near the ocean, where they would try to lure in any creatures that got close by casting images of whatever they found most attractive, be it loved ones, an attractive potential mate or even, in the case of Scrat, items, such as Scrat's prized acorn. Scrat, trying to bury the 'acorn' jumps repeatedly on the siren, leading the others to pretend to be acorns and chase him.

At the end of the film, the sirens, detecting more prey, found Captain Gutt, a piratical Gigantopithechus, in a cave. And one of them appeared before him as a mermaid of his kind, lying in a bounty of fruit inside a massive shell. She soon managed to seduce Gutt, but revealed her true form when he got too close to her, grabbing the ape by the lips, and pulling him in as the shell closed, preventing any escape. All that could be heard of Gutt are vocalizations of pain as more sirens swam towards the shell to join in eating him alive. 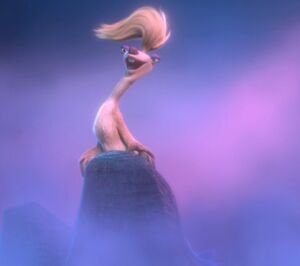 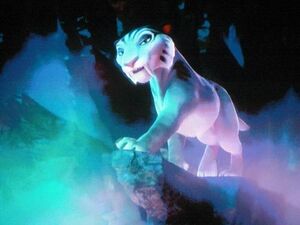 The siren is about to reveal its true nature.

The Gigantopithechus turns into a siren after Captain Gutt gets too close to her and the clam.

The Siren grabs Gutt to eat him alive.

The sirens about to eat Gutt alive.