Find her "lover" Petelgeuse and become one with him (failed).

Obsessive Stalker
Sirius, also known as the Sin Archbishop of Wrath and Sirius of Wrath, is a major antagonist in the 2014 Japanese dark fantasy light novel series Re:Zero − Starting Life in Another World. She first appeared as one of the main antagonists of the fifth story arc.

Unlike most members, Sirius did not join the Cult because she revered the Witch. In actuality, she became a member because she was madly in love with Petelgeuse Romanée-Conti, the Sin Archbishop of Sloth, and had hoped to grow closer to him by joining the Witch Cult. Her obsession with Petelgeuse was fanatical to the point that she referred to herself as Sirius Romanée-Conti despite not being married to him. Although she felt no fealty to the Cult, Sirius followed the direction of the gospel unquestionably.

At some point Sirius absorbed the Wrath Witch Factor that had previously belonged to Minerva, the Witch of Wrath. With the Factor, Sirius could utilise the Authority of Wrath, a power that allowed her to transmit her own emotions and senses to anyone within a certain distance of herself. She could also share the emotions and senses of other people. In this regard, Sirius could kill people en masse by killing someone and distributing the damage to other people. Although Sirius wasn't considered the most formidable of the Sin Archbishops (that title belonging to Regulus Corneas), she was known to have the greatest physical strength.

Under the direction of the gospel, Sirius led an assault on the water gate city Pristela alongside the Archbishop of Greed Regulus Corneas, the Archbishop of Lust Capella Emerada Lugunica, and the dual Archbishops of Gluttony Lye Batenkaitos & Roy Alphard. During the attack, Sirius met the Japanese teenager Subaru Natsuki, who had killed Petelgeuse and absorbed his Witch Factor. Sirius, unaware of Petelgeuse's demise and firmly seated in her delusions, mistook the young man for Petelgeuse as he bore the same scent as her beloved. Although the Cult initially held an advantage, a resistance led by Natsuki was able to drive the Witch Cult from the city. Sirius was captured by the noblewoman Priscilla Barielle in the process and Corneas was killed. However, due to the nature of Sirius' power, she couldn't be executed.

Sirius was draped from head-to-toe in tightly wrapped bandages that emphasized her slender and athletic physique. Because of these wrappings, the physical characteristics of Sirius were mostly obscured. However, several strands of her long silver hair seeped through the bandages and flowed freely. Furthermore, her mouth and bulging amethyst left eye were both unobscured. A single red teardrop perpetually hung just below Sirius's exposed eye.

Long steel golden chains are wrapped around her arms which trail along the ground as she moves. These chains have hooks on their edges which allow Sirius to wield them lethally in close combat. With the exception of her bandages, the only other thing Sirius wears is a long purple cloak. The inside of the cloak is sky blue with several vertical red decorative lines. All though not visible, she carries the Gospel of the Witch Cult around in her cloak.

Sirius is obsessively in love with her fellow Archbishop Petelgeuse Romanée-Conti for unknown reasons. He apparently gave her the name "Sirius." She has spent most of her days following him around, trying to get him to fall for her. Sirius is prone to being jealous of women around Petelgeuse and by extension Subaru, specifically displaying disdain for the relationship she perceived between the latter and Beatrice.

Sirius doesn't wish to revive The Witch of Envy, only seeing her as a potential love rival over Petelgeuse. She has stated that if Petelgeuse managed to revive the witch, she would burn Satella in front of his eyes. Furthermore she has no personal affiliation to the Witch Cult as she only joined the organisation for Petelgeuse. Despite this, Sirius follows the Gospel unquestionably.

Although she is completely insane, Sirius is very polite and friendly to most people, apparently taking no pleasure in the suffering of innocent people. Her polite way of speaking, coupled with her depraved nature, is considered very disturbing by most onlookers. Despite her apparent pleasantry, Subaru commented that her behavior seemed superficial.

Sirius describes anger as the most important thing in her life because Petelgeuse gave it to her. She became annoyed when Regulus claimed to be angry, believing that she was the only one who truly understood what anger was. She has an extreme prejudice against spirits and half-elves, completely dropping her friendly composure in the presence of the silver-haired half-elf Emilia. 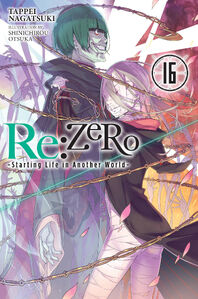 Sirius and Petelgeuse Romanée-Conti on the cover of the sixteenth light novel volume. 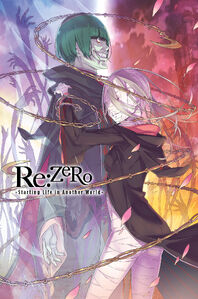 Sirius and her beloved on the textless cover of the sixteenth light novel. 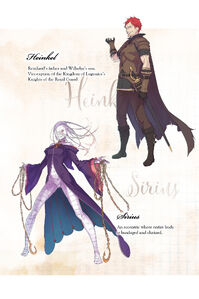 Character summaries of Sirius and the Knight Heinkel Astrea in the sixteenth light novel. 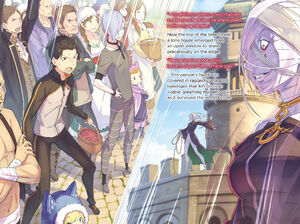 Sirius speaking to a gathered crowd from atop a clocktower in Pristela. 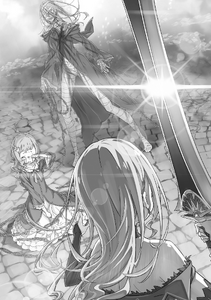 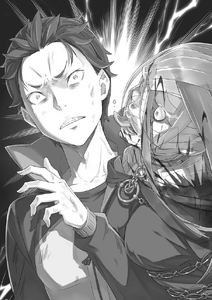 Sirius licking her "beloved" while locked in chains.