Punishing her patients by floggings.

Go to the Vatican with Timothy Howard.

Sister Jude Martin is the tritagonist of American Horror Story: Asylum and the main antagonist in its first four episodes. She is the stern head nun in charge of administration and discipline at Briarcliff Manor. She is a main character in Asylum. Her character undergoes a major fall from grace, during which her name and title change by the end of the story.

She is portrayed by Jessica Lange, who also played Constance Langdon, Fiona Goode and Elsa Mars in other seasons.

Sister Jude is the administrator at Briarcliff. It is revealed that she became a nun after she was involved in a hit-and-run. In her first appearance, she is seen throwing reporter Lana Winters out of her office for attempting to get a scoop on the alleged serial killer being held there. When Lana breaks back into Briarcliff, she finds that the patients are subjected to horrific acts of abuse, under the authorization of Sister Jude. Lana is apprehended, and when she wakes up, Sister Jude informs her that she is now a patient there.

To ensure her kidnapping goes undetected, Sister Jude blackmails Lana's lesbian lover Wendy into signing her into Jude's care, threatening to expose their relationship and ruin her career if she doesn't. Sister Jude and Chief of Medicine Dr. Arthur Arden subject her to a variety of tortures, most notably electroshock therapy, supposedly to "cure" her homosexuality. Their true intentions for doing this, however, are to erase her memories so she will be unable to report them to law enforcement, if and when she is released. Lana resorts to writing her daily experiences in a journal to prevent her from forgetting them, as she recovers.

Jude loses her role as main antagonist after Sister Mary Eunice falls under the influence of The Devil, who was released from patient Jed Potter during an exorcism. After Jude tries to expose the fact that Arden is actually a Nazi war criminal in hiding, Mary Eunice frames her for the murder of a security guard. Jude loses her clerical status, and returns to using her real name, Judy Martin, as a patient of Briarcliff. Judy becomes a more heroic character following her fall from grace.

Jude believes that mental illness is the fashionable explanation for sin. She is dedicated to the management of Briarcliff, hoping to make it a model institution and to atone for past sins. While stern towards her subordinates and those in her care, she is remarkably self-effacing in the presence of Monsignor Timothy Howard, the head of the institution, whom she fantasizes about. Jude does have a capacity for compassion, indicated by her treatment of Sister Mary Eunice and a suffering Jed Potter. She resents Arden, both for his dismissal of her faith and the free rein he is permitted outside her purview. 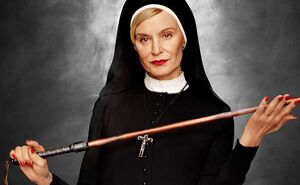 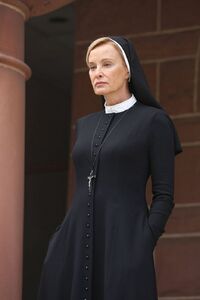 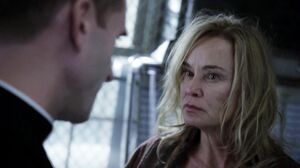 Judy as a mental patient