Sisterhood of the Masked Messenger

Sisters of the Masked Messenger

Worship Masked Messenger for all eternity.

The cult is strongest in Morocco where it's centered in the ancient city of Marrakesh. Small pockets of the cult exist in a number of the larger towns all along the East African Coast (particularly Zanzibar and Mombasa). The High Priestess of the Sisterhood is said to know the location of the Temple of the Masked Messenger; a mysterious building which is said to rise out of the desert sands at times of great significance.

Many of the cult members live double lives - often marrying Arab men who have no idea about their wives' occult activity. Members of the Sisterhood usually carry a small curved dagger designed for carrying out stealthy assassinations.

The Masked Messenger; a collection of short stories written by the former cult high priestess Sharinza, is considered particularly important to the cult. The Sisterhood is said to be served by a pair of enigmatic beings known as the Faceless Watchers. 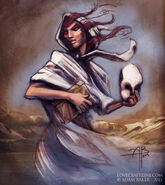 Add a photo to this gallery
Retrieved from "https://villains.fandom.com/wiki/Sisterhood_of_the_Masked_Messenger?oldid=2764603"
Community content is available under CC-BY-SA unless otherwise noted.