Before or during the Imperial Era

Unleash its forces, including the Final Order, against the galaxy and conquer all worlds, and then establish a new Sith Empire

Ensure the rebirth of the Sith Order
Destroy the Resistance and the Jedi (all failed).

They are a cult of Sith worshippers who were founded before or during the age of the Galactic Empire that would be led by a revived Emperor Palpatine after the Empire was defeated at the Battle of Endor and the second Death Star was destroyed.

They used the First Order as a distraction while they built up a massive fleet of Xyston-class Star Destroyers outfitted with axial superlasers. This Sith Eternal fleet was called the Final Order, and was built to allow the Sith to once again conquer the galaxy and regin supreme through a new Sith Empire.

Following the defeat of the Galactic Empire at the Battle of Endor, which saw the destruction of the second Death Star, the resurrected Sheev Palpatine retreated into the Unknown Regions with a collection of his followers to rebuild his fleet. From the shadows, he formed the First Order through his creation Snoke to antagonize the New Republic and distract from his real plans, to build up an extremely large fleet of Xyston-class Star Destroyers, the Final Order, and use them to swoop in and conquer the galaxy once more, in an attempt to restore the Sith Empire.

The Emperor was eventually defeated by his secret granddaughter Rey and suffered his final death when she directed her grandfather's Force lightning back upon him. After Palpatine died, the remaining Sith Eternal both on the surface of Exegol and the Sith fleet were decimated. A number of uprisings took place across the galaxy, causing the rapid collapse of the First Order. The death of Palpatine and the destruction of the Sith Eternal had prevented both the rebirth of the Sith Order and the establishment of the new Sith Empire. 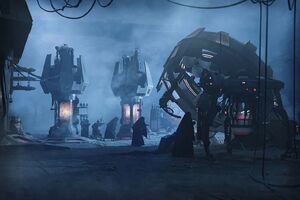 The Sith cultists chanting on Exegol.

After Palpatine died, an explosion occurred sending stone debris towards the cultists, killing them.