Protect the Sith Empire and maintain the regime and its power throughout the galaxy.

Eliminate the Jedi Order and overthrow the Republic.

Sith Troopers are common antagonists in Star Wars: Knights of the Old Republic. The Sith Troopers were foot soldiers of the Sith Empire under the control of the infamous Sith Lord, Darth Revan, and would later return as archetypes for the rest of the galaxy. They first appeared during the Jedi Civil War as the backbone and soldiers for Revan's Sith Empire and would later return as standard infantry units for the Sith Triumvirate during the Dark Wars which was formed from the remnants of Revan's Sith Empire.

The majority of Sith Troopers were originally members of the Republic Military with most coming from the Republic Army. They were formed from triatorous members of the Republic Army along with sympathetic and idealistic citizens of conquered planets to form the new military. The Sith troopers would go through intense training where the weakest recruits would be snuffed out by the Sith tactics and would lead to the Sith military being strong, organized, and proficient. Fear was installed in the minds of the Sith troopers and this lead to them never stepping out of line and prevented them from commiting treason like they did to their former allies in the Republic.

The Sith troopers of Revan's returning armada were traitorous members of the Republic Army, who would later be joined by idealistic volunteers from conquered planets. The weak would be siphoned out through the merciless Sith training schemes, resulting in an efficient and powerful fighting force. The fear present in each trooper not only spurred them on in battle, but also prevented them from turning traitor for a second time. Traitors would encompass much of Revans army, the largest of which would be Admiral Saul Karath.

Sith Troopers would appear during the Jedi Civil War, the New Sith Wars, and briefly during the rise of the Galactic Empire. Darth Bane would utilize them, the final times of which they would appear, Bane only was connected to Revan via holocron. 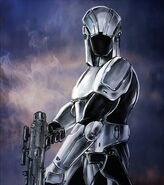 Artwork of a Sith Trooper.