Protect the master and stay alive at all cause

Six-Shooter is a six armed cowboy puppet with guns in each hand to appear in Puppet Master.

He wears a handkerchief that jumps up to cover half of his face whenever he shoots someone with explosive bullets.

It is never explained how this is possible, but one may just assume it is part of the magic that animates him in the first place. He did not appear until the second film, but he was just being repaired and played no part.

He appeared fully constructed in "Toulon's Revenge". Six-Shooter, like several of the other puppets, is presumably inhabited by the soul of a human being.

It's identity is never revealed, however, his retro version in Retro Puppet Master contains the soul Afzel.

Little is known about Six-Shooter but for the fact he was based on Toulon's perception of an American design (In this case, a stereotypical cowboy).

The soul inside Six-Shooter is never mentioned, but it is speculated that simply another soldier (A rather gun-happy one) is inside.

Another theory is that the spirit of Afzel, who was placed inside the retro version of Six-Shooter, still remains in the modern version (Six-Shooter, along with Tunneler and Pinhead, is one of Toulon's first main puppets).

As can be assumed, Six-Shooter enjoys shooting, and seems proud of successful shots. From the laughing sounds he makes, it can also be assumed Six-Shooter is a rather jovial being.

Six-Shooter has six guns, one for each hand,  that fires real bullets capable of killing someone.  In Puppet Master vs. Demonic Toys, his arms were damaged and replaced with working lasers capable of cutting through metal. 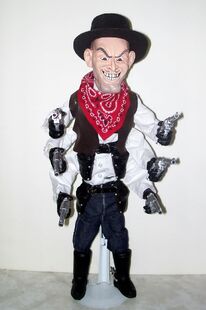 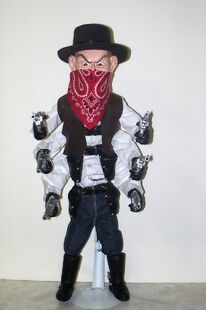 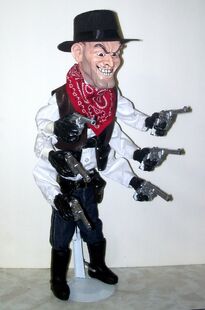 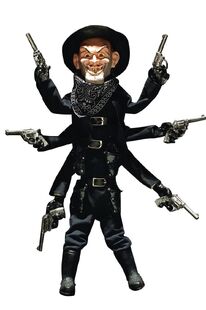 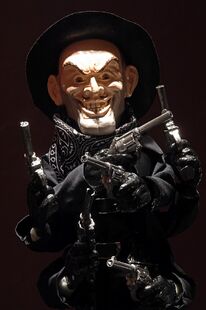 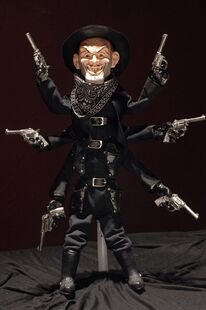 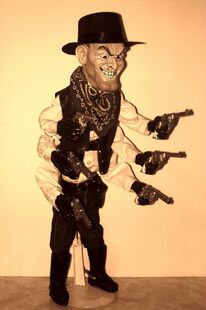 Six-Shooter in the Old Western Photo 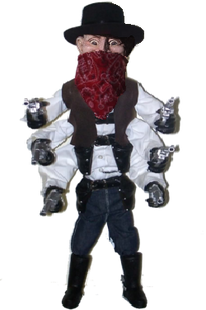 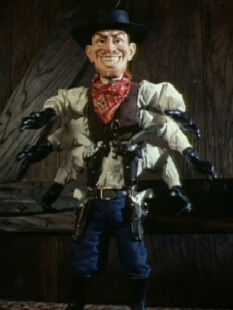 Add a photo to this gallery
Retrieved from "https://villains.fandom.com/wiki/Six-Shooter?oldid=3552583"
Community content is available under CC-BY-SA unless otherwise noted.