Escape The Nest (all succeeded).

Six is the main protagonist of the Little Nightmares series, making appearances in all games. Despite her role as the meek victim of The Maw's terrors, a case could be made for her villainous habits due to the devouring of The Runaway Kid, murder of The Lady, and usage of the latter's powers to kill more people.

Six is voiced by Anna Moberg and Hilda Liden.

Very little is known about Six. What we do know is that she lived in a city until The Ferryman captured and transported her to The Maw. Six was also a former prisoner of the Nest, eventually looting the nameless protagonist's raincoat following their presumed demise before escaping by raft in Very Little Nightmares.

In Little Nightmares: Secrets of the Maw, Six's role is minor, seen caged in a cage alongside The Runaway Kid and being seen crossing the shoe room.

In the base version of Little Nightmares, Six gains her main protagonist role. Somehow escaping the clutches of the gargantuan goons and sent into hiding, she is soon inspired to escape The Maw after a nightmare about The Lady. After being briefly captured by The Janitor and following a lengthy battle of wits between the two before Six succeeds with severing his arms. Following this scene, she then devours a live rat, the first true sign of her ravenous gluttony. After besting The Twin Chefs in the kitchens, she heads off to the guest arena, fending against both The Lady and The Maw's hungry, swarming guests. Her hunger also once more returns to plague her, turning The Runaway Kid in Nome form into a unlucky snack. Following The Lady into her living quarters, she eventually fights, bests, and murders her by a bite to the neck. Gaining her powers, she drains the life-force of the various guests before finally escaping.

Six will return in Little Nightmares II as the deuteragonist.

Tiny compared to the other characters in the game, Six wears a long yellow raincoat over a white gown. Her black hair covers her eyes, leaving the only parts of her face visible being her nose and mouth.

Although she doesn't speak and helps The Girl throughout Very Little Nightmares, Six bares the signs of a anti-heroic figure, not caring about the other prisoners on The Maw (possibly due to her failure to save The Girl in the Yellow Raincoat), and only focusing on her on survival. She is quite intelligent, resourceful, and stealthy, successfully solving puzzles, evading capture, and figuring out The Lady's weakness. She also is pained with routine hunger pains through out the game, eventually escalating into devouring the protagonist in the game's prequel DLC even when he offered her existing food. 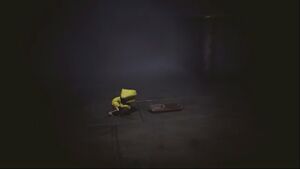 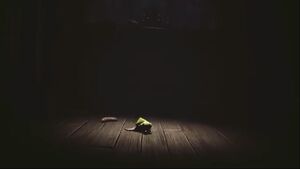 Six consuming The Runaway Kid, perhaps one of the most telling claims of villainy.

Six in Very Little Nightmares.
Add a photo to this gallery
Retrieved from "https://villains.fandom.com/wiki/Six?oldid=3485548"
Community content is available under CC-BY-SA unless otherwise noted.