Usurper and ruler of the Mountain of Flowers and Fruit (briefly)

Disguise as Sun Wukong, then go to the West by himself and receive Buddhahood.

The Six Eared Macaque, also known as the fake Sun Wukong, is a major antagonist in the classic Chinese novel Journey to the West and its multiple adaptations. As his name suggested, he is a macaque with six ears that is as powerful as Sun Wukong himself.

For most of his appearance, the Six Eared Macaque disguised as Sun Wukong, thus his appearance looks identical to the real Wukong himself. When revealed his true form, he is a macaque with six ears, three on each side of his head.

Not much is known about the Six Eared Macaque's personality since he poses as Wukong for most of his appearance, however he represents what Wukong could become had the latter chose power and chaotic freedom over protecting Xuanzang. He also appears to be power hungry, as not only took over Wukong's throne, he also trying to took over the Buddhahood that is supposed to be given to the real Monkey King. However, he appears to be somewhat cowardly than the real Wukong, as he tried to flee once the Buddha exposed his true identity.

According to the Buddha, like Sun Wukong, the Six Eared Macaque is a magical monkey, who has supernatural abilities. His six ears allow him to listen everything, makes him omniscient. It is possible that, like Wukong, he was born from a magical rock, technically would make him Wukong's sibling.

The Six Eared Macaque first appears disguised as Sun Wukong, not long after Xuanzang sent the real Wukong away for the second time (ever since the Baigujing incident), offers Xuanzang a bowl of rice. Xuanzang angrily refuses, caused him to beat the monk unconscious.

Later on, Sha Wujing met him in the Mountain of Flowers and Fruit, believing him to be Wukong. The macaque told Sha Wujing that his desire is to go to the West himself and receive all the scriptures and the Buddhahood all for himself, as well as made his own Xuanzang's party, all are monkeys in disguises. This angered Sha Wujing, who killed the fake Sha Wujing of the Macaque's party. Wujing then met the real Sun Wukong, and rant at him. The two head back to the mountain, where Wukong met the macaque, and the two battled. Despite all of the deities' best effort, only one could tell them apart, but said that only the Buddha can capture the imposter.

The two then fight in front of the Buddha, who used his magical bowl to capture the macaque, forced him to revert back to his true form. In anger, Sun Wukong killed the macaque.

The Six Eared Macaque is a very good actor, can impersonate Sun Wukong not only in appearance, but personality as well. He can even able to fake the weapons, make them possess similar powers like Wukong's. He is also omniscients, due to his six ears that allow him to hear everything. Only the Buddha and another one single deity can tell the difference between him and the real Sun Wukong. 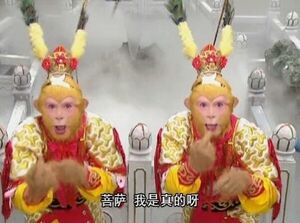 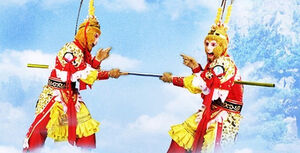 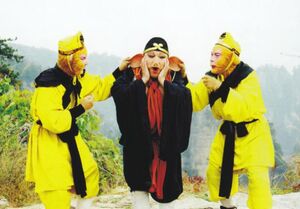 Retrieved from "https://villains.fandom.com/wiki/Six_Eared_Macaque?oldid=3553239"
Community content is available under CC-BY-SA unless otherwise noted.