Training at the Citadel.

Track down and eliminate all surviving Jedi.

Psychotic Murderer
The Sixth Brother was a male Force-sensitive Inquisitor who worked for the Galactic Empire. He appears in the novel Ahsoka as the main antagonist. He was originally a Jedi Knight, but fell to the dark side and joined the Inquisitorius where he became an agent of the Galactic Empire and servant of the Sith where he was to down and eliminated any surviving Jedi the Empire could find.

One year after the rise of the Empire and the fall of the Jedi Order, the Sixth Brother and his fellow Inquisitors are tasked with hunting down and kidnapping Force-sensitive children in order to prevent them from becoming Jedi. While Fifth Brother may have lost a hand to Vader's training, Sixth Brother lost an entire arm to the Sith Lord. The dismemberments came as Vader's way of teaching the Inquisitors to shed their Jedi teaching of fighting defensively, and it was a lesson Sixth Brother took to heart.

Eventually, he hears word of a Force-sensitive being (Ahsoka Tano) old enough to have received Jedi training hiding in the Outer Rim territories, and abandons his original task in favor of hunting "bigger prey". He goes to the farming moon of Raada, where the supposed Jedi was last seen and captures a dark-skinned girl named Kaaden who the Force-sensitive associated with, mercilessly killing her farmer friends in the process.

Using Kaaden as bait, the Sixth Brother lures Ahsoka into a trap and engages her in battle. He fought fiercely, but not quite as fierce as Ahsoka Tano when he tried to hunt her down. However, despite his frightening appearance and demeanor, he quickly proves to be a sloppy fighter, and ultimately loses when Ahsoka causes his double-bladed lightsaber to overload and explode, killing him. The former Padawan of Vader grew battle-hardened over the years, and during her fight with Sixth Brother, she sensed the kyber crystals calling out to her. She summoned the crystals to her hands, exploding Sixth Brother's weapon and killing him in the process. Ahsoka then used the crystals to forge the white lightsabers she wields now purified of their former owner's tainted Force.

The Sixth Brother was of a humanoid species which neither Kaeden Larte or Ahsoka Tano were able to identify. He was described as tall and broad-shouldered with unnatural-looking grey skin, piercing ice-blue eyes, and distinctive scar-like markings on his cheeks, nose and chin, making him sinister in appearance. Like his fellow Inquisitors, he wore black and grey body armour and carried a gyroscopic double-bladed red lightsaber. He also wore a helmet with a face shield that could be lowered to protect his face.

Despite his intimidating appearance and personality, the Sixth Brother was not particularly strong in the Force or skilled in lightsaber combat, having been unable to track down a Force-sensitive child, and having been easily bested by Ahsoka Tano in combat. He was described as lacking finesse and relying mostly on brute strength. Despite this, however, he possessed enough skill to deflect blaster blots back at their firers and throw his lightsaber to chop a Rodian in half. 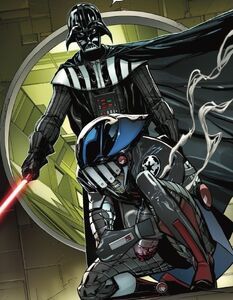 The Sixth Brother lost his left forearm in Vader's training.