Get Zim to work at his restaurant.

Sadistic Slaver
Sizz-Lorr is an antagonist from the cartoon show Invader Zim, only appearing in the episode called "The Frycook What Came From All That Space". 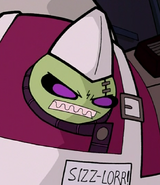 Retrieved from "https://villains.fandom.com/wiki/Sizz-Lorr?oldid=3317146"
Community content is available under CC-BY-SA unless otherwise noted.